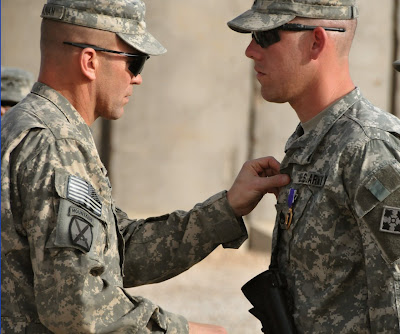 The attack came during a route clearance mission when Harvey, who was truck commander of the lead vehicle, dismounted to clear debris that became tangled underneath his vehicle.

"As I was leaning forward, I saw three rounds hit by my feet," the Houston native said. He added that he quickly turned and identified the enemy shooter, partially concealed behind a berm. "I returned fire and yelled back up to my driver and gunner."

He continued to return fire until he saw the enemy go down. He then stood up and scanned the area.

"I saw something to my five-o'clock and called up to the gunner. As soon as I turned, I got hit. The round went through my Kevlar," he said, pointing to a point above and behind his right ear.

The Kevlar altered the course of the bullet, channeling the bullet around his head and down the back of his neck.

Harvey said the force of the impact slammed his head into the vehicle, cutting a gash on his cheek. He went down and noticed blood flowing from his left cheek. In his shock, he said he thought the bullet had passed through his face.

As Harvey lay on the ground, he said he continued shooting at the enemy, becoming increasingly disoriented.

"I was trying to shoot the guy. (All of a sudden) I thought I was at a pop-up range, because I couldn't hit the target," he said.

"I could see my rounds impacting. Pow! Pow! Pow! I remember thinking: Man, this pop-up target won't go down. I'm going to get a bad score," he shook his head with a laugh.

"I thought: this is probably it. I kept shooting and shooting and yelled up to my dudes and told them, 'Sorry' and told my wife, 'I'm sorry,'" he reflected with a smile.

His Soldiers continued engaging the enemy and another vehicle in the convoy pulled around to cover him and load him into their truck.

"They pulled off all my gear and the medic came up and checked me out," he said.

Other than minor shrapnel wounds, cuts and a possible concussion, the medic told him he was fine. The other Soldiers downplayed the incident and told Harvey that he was probably just hit with shrapnel from bullets striking the vehicle and ground.

"I told them, 'No, I'm pretty sure I got hit,'" Harvey said. "That's when their squad leader picked up my Kevlar and said, 'Hey man, you've got a bullet hole through your Kevlar!'"

"I still had my adrenaline going, so I wasn't really in that much pain," Harvey continued. "I still wanted to (command) my truck."

However, his platoon leader made him try to relax and rest. They limped the vehicle back to Forward Operating Base Endeavor on a flat tire.

"I smoked a cigarette and drank a Rippit. By that time, my adrenaline stopped and I started puking and got dizzy," said Harvey. "I was kind of going in and out of it. The (medical evacuation helicopters) came in and medics checked me out and gave me (intravenous fluids)."

"I came to as I was going into the hospital at Balad. They checked me out and told me I was lucky," said Harvey.

They gave him additional tests and treated him for minor shrapnel wounds, cuts and a bad concussion.

After a few days of tests and evaluations, he was sent back to Camp Echo and saw his Soldiers for a day before going on his pre-planned environmental morale leave.

"I was already scheduled for leave, so I went home and hung out there," said Harvey. He said his wife Crystal, whom he has been married to for more than a year, was shocked when she found out, but also strong and supportive.

"She's pretty strong. She got through it and understands ... but she told me to stop getting hurt," he laughed. "I get hurt too much," he added with a shrug.

About a month after the attack, he said his headaches began to subside and have now almost completely stopped. But he said the headaches are a small price to pay for his life, thanks to his helmet.

Harvey has been in the Army for more than seven years and has deployed to Iraq four times. He said he has been shot at or hit by roadside bombs during each deployment and has been saved a number of times because of the equipment and armor provided to him by the Army.

This is Harvey's second Purple Heart. He received his first during a deployment to Iraq in 2003 after a roadside bomb explosion injured him in the head and neck. In that incident, his older-style helmet stopped or hampered the destructive passage of shrapnel. He said he feels his helmet helped save his life then as well.

He said the incidents increased his confidence in the equipment he uses. The members of his command and his fellow Soldiers are also more confident after seeing the deadly effects of a bullet thwarted by the helmet that many of them once complained about having to wear.

"You guys looked at that Kevlar and saw the direction that (round) was going and where it went out. It did exactly what it was designed to do," said Lt. Col. Leo Caballero, commander, Special Troops Battalion, to the company formation during the award ceremony.

For Harvey, his Purple Hearts are reminders of the sacrifices he has made and is willing to make for his country and his people. They are also reminders of how close he came to dying and how precious life is.

"I feel lucky. This wasn't the first time I've been hit, but it kind of opens my eyes a little more," he said"

He said he appreciates life and what he has more than ever.

"I wasn't married for my other deployments. We've been married a little while and are trying to have kids," said Harvey. "It kind of made me think more, but I still plan on staying in. This is what I do. They'll probably have to kick me out after 30 years."

However, he said he hopes, as does his family, that he receives no more Purple Hearts.

Thank you for your service, Staff Sgt. Harvey!
Posted by The Brat at 1:11 AM