The family that serves together 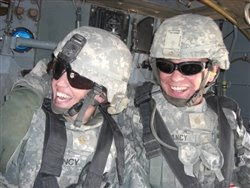 My regular readers know how much I love to share stories about family members serving together. Saw this one, and knew you all would want to read it too:


Face of Defense: Military Couple Finds Ways to Be Together

BAGHDAD, April 14, 2009 – June 6, 1998, the 54th anniversary of D-Day, probably was a day like any other that summer. There’s a good chance it was sunny in a small town in New York state outside of Fort Drum, where two young Army captains met for their own rendezvous with destiny.

A month later, they went on a date to see “Saving Private Ryan.” Eleven years later, Lt. Col. Hailey Clancy, of Mesa, Ariz., and Maj. Michael Clancy of Bronx, N.Y., are happily married and serving together as part of the 1st Armored Division’s 2nd “Iron” Brigade Combat Team. They have been deployed to Iraq for a year.

Like most military couples, Hailey Clancy, who serves as the brigade’s logistics officer, and Michael Clancy, the 40th Engineer Battalion plans and operations officer in charge and the brigade engineer, have not always been able to stay together, but try to as much as possible.

“We dated for about five years before we got married,” they both said together -- not in unison, but with the familiarity of a story told more than once, a story that consisted of being stationed in different places throughout the next five years and spending lots of time on the highway each weekend to see each other.

Two years after they met, Hailey Clancy left Fort Drum to attend graduate school at Cornell University in Ithaca, N.Y. Michael Clancy stayed behind for a year and moved even farther away for a job as an active Army advisor to a reserve component unit in Schukyll County, Pa.

Go read the rest of this GREAT story here.