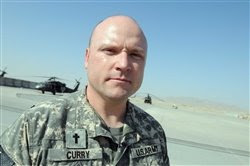 He is a member of an elite division deployed halfway around the globe to fight terrorism. He’s also a relationship counselor, an event coordinator and senior advisor.

“There are three, maybe four hats that a chaplain wears,” Curry said. “The chaplains fill an advisory role to the unit’s commander as a member of the commander’s staff. He is a counselor to the soldiers of the unit, as well as its minister.”

Curry balances all of these responsibilities.

“Chaplains serve in every unit, and every unit’s chaplains have to learn their particular unit’s vernacular,” Curry said.

A native of Louisville, Ky., Curry, 40, earned a master of divinity degree from the Southern Baptist Theological Seminary. He holds a lot of “firsts” in his family – he’s the first to go to college, the first seminary graduate, the first minister and the first military officer.

“I’ve always had a respect for soldiers and what the military does,” Curry said.

He served eight years as an Army reservist. After a six-year break that saw him ministering in the civilian world, he and his family decided he would go back into the Army as a chaplain. Two weeks later, a pair of passenger planes struck the twin towers of the World Trade Center in New York, changing the nature of military service immediately, radically and for the foreseeable future.

Curry spoke again with his family, knowing his service would be dramatically different from what they previously thought it would entail. They agreed to press on, and seven years later, he’s halfway around world and happy with his decision.

In Afghanistan, much of Curry’s job involves helping soldiers communicate with their families.

“I think it is safe to say that 70 percent [of soldiers’ worries are] family related, or that is the root problem,” said Curry. “Strong relationships are not harmed by deployment. They only get stronger. But weak relationships are very much in danger.”

Curry has to juggle a large number of troops and all of the issues they bring with them. Through his skills and experience, he sees the similarities.

“You begin to see that the people are different, but the situations they’re going through are the same,” he said.

His office has developed a rhythm as the deployment has worn on and has expanded its reach.

“Those initial months after you deploy, the counselings are through the roof,” Curry said. “The Army family, in some ways, endures more hardships than the soldier does.”

Those close to Curry feed off his energy.

“I’ve worked for four chaplains, and Chaplain Curry is by far the most passionate,” said Army Sgt. Matt Mellott, a chaplain’s assistant from Newcastle, Pa. “He’s passionate about his job, about the soldiers, and he’s the hardest-working chaplain.”

A large part of Curry’s job is coordination. The coordination between himself and his counterparts is also one of his biggest sources of pride.

“I think one of the most important things is the relationships between these chaplains here,” he said. “That’s been the most fulfilling. I think the other thing is in the moment of tragedy, being able to be a shepherd, and leading people through.”

It all came together over Thanksgiving, when the chaplains from Kandahar travelled out to visit soldiers at isolated bases throughout southern Afghanistan. Curry coordinated the trip.

“We went ahead and said, ‘We’re going to try to treat this like another big, religious day,” he said, likening it to the treatment the chaplains give Christmas or Easter.

In the past, he said, events like this had failed to come together. But this time, the chaplains were successful, as Curry worked with his commander to ensure that the chaplains received helicopters for the mission.

Thank you for your Service, Capt, Curry.