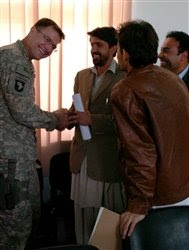 PAKTIA PROVINCE, Afghanistan, April 23, 2009 - Village elders here, in conjunction with the Paktia Provincial Reconstruction Team, held a bidders' conference at the governor's compound in Gardez this month to give local contractors a chance to compete for construction projects in the area.

In the past, the PRT has selected contractors from a pool of bidders based on pricing and reliability. But Afghan elders expressed their concern that several contractors have not met expectations on various projects, which has initiated a change, Air Force Lt. Col. Daniel Moy, PRT commander, said.

"Through this process, we are getting two things done at once," he said. "We are completing the project, which is how people see it is getting better, because they see that the government is capable of getting things done here. We are also enabling the Afghanistan government to build its necessary organization infrastructure, coordination and capacity to do these projects.

"It takes a lot of planning, discussion and meetings for the government to put one of these projects together," he added. ...