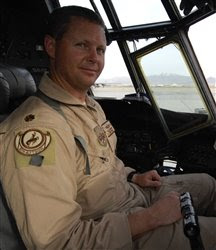 BAGRAM AIRFIELD, Afghanistan, March 31, 2009 – What sets Air Force Maj. Alan Brown apart from other airmen in the gym at Camp Cunningham here isn't his workout routine. It's his right leg.

"When people see me in shorts at the gym, there's definitely a pattern," said the 42-year-old mobility pilot from Pine Bluffs, Wyo. "They glance at my eyes, look down at my leg and then look back at my eyes. It happens every time."

Brown, who is deployed from the Wyoming Air National Guard’s 187th Airlift Squadron as part of Bagram's 774th Expeditionary Airlift Squadron, shot his leg in a hunting accident more than 10 years ago. After four weeks in a drug-induced coma and three weeks of grueling rehabilitation, he was released from the hospital as an above-the-knee amputee. His family made the decision to amputate after several attempts to restore blood flow to the leg failed. That decision saved his life.

"My body was shutting down, and they made the tough decision to amputate, not knowing how I would react," the major said.

Once he woke up, remembering the accident, his eyes were drawn to his leg. He asked the obvious question: "I lost my leg right?" Then he asked if his then-girlfriend -- now wife, Gina -- was still around. His third question provided his family some kind of relief: "What can I do to fly again?"

The answer to the last question already had been researched while the major was comatose. Knowing how passionate Brown was about flying, squadron mates had done some homework to find out exactly how he could fly again. Upon hearing his question, they shared with him the names of two civilian amputee pilots who had returned to the cockpit following similar procedures.

Despite recommendations from medical professionals, Alan left the crutches and wheelchair behind, focusing on being back to normal. He never looked back.

"Attitude is everything. Either you're going to let an injury like this ruin your life, or you resume your life," Brown said.

"I had invested a lot of time and energy into becoming a pilot," he said. "I wasn't about to walk away from the only career I had known."

First, Brown had to prove he should stay in the National Guard. Once he convinced leadership he was dedicated to the mission, the next step was to convince them he could deploy. His current deployment, soon to end, is his third since he regained his worldwide qualification in 2005.

In the meantime, a well-meaning co-worker offered him a handicapped parking spot so he wouldn't have to walk so far to work.

"I laughed, thanked her and explained that I wasn't handicapped," he said. "It totally went against everything I was trying to achieve. In my mind, I couldn't be handicapped and convince people I was able to fly a plane."

Brown’s last and most challenging task was to assure anyone who would listen that he wouldn't be a liability as a pilot. He had to prove this with a testimonial from a flight doctor that he could perform as a two-legged pilot.

Before the accident, Brown had flown for almost five years. From start to finish, it took another seven years to get back in the saddle with the military. His dedication to the mission helped to motivate him toward requalifying, he said.

"In my mind, I need to be deployed with my buddies,” he said. “We've been training and flying together for years. It's not an option to stay home while they're here taking on the mission. Flying is in my blood. It's what I do. And besides, I believe in what we're doing in Afghanistan."

Brown admitted flying is different with a prosthetic.

"As a pilot, using your feet is second-nature," he said. "I just had to learn how to operate in a different way after the accident."

The deployed environment does present one significant challenge to the pilot.

"The gravel is rough," he said with a laugh. "I haven't fallen yet, but I can tell you that I know where every paved surface is on the base."

Brown’s prosthetic leg is slightly shorter than his remaining leg to ensure he doesn't drag his foot on the ground. He has a hydraulic knee to aid with stabilization, but it's much less maneuverable than his own leg.

That lack of flexibility limits him at the gym with weight training and cardiovascular activity, he said, but he discovered he can ride the stationary bike with the help of a custom strap crafted by the unit's life-support crew.

"Just about every day, someone approaches me to ask what happened," he said. "People aren't sure if I'm sensitive about it. But once I let them know that I'm not offended and explain what happened, everything is fine."

The one thing the major is reluctant to talk about is how he's helped others in his situation. But he takes every opportunity to encourage other amputees there is life after a lost limb.

"This isn't about me and what I've accomplished,” he said. “I made a big mistake. There's no one to blame for this but me, and I don't want to stand out. Being comfortable with my situation gives me a chance to answer questions other amputees may have on what they'll face."

On a recent trip to Walter Reed Army Medical Center in Washington, D.C., Brown visited many veterans facing the future without a limb.

"I just wanted to answer any questions they had," he said. "Coming home and not knowing what the future holds can be overwhelming."

Brown emphasized how impressive it is that the military has taken a wider approach with amputees in light of the recent increase in those losing limbs in Iraq and Afghanistan. He also said he understands the importance of friends and family when facing difficulty.

"Everyone faces challenges, but having the right mindset and the right people to support you makes the difference," he said. "I'm the most fortunate guy around. Not only do I get to fly, but I am surrounded by great people who have supported me and have now accepted me as just another pilot. That's all I've ever wanted."

Thank you for your service, Major Brown!