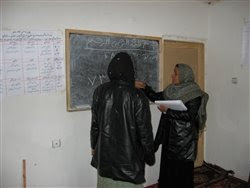 During a lesson about numbers, an Afghan woman asks her colleague to write the number 100, March 23, 2009, in Afghanistan’s Panjshir province. The women are enrolled in a two-year U.S. Agency for International Development-funded program called “Learning for Community Empowerment,” designed to increase literacy and numeracy education, while also providing vocational training. U.S. Army photo by Sgt. Amanda Cutler

In Panjshir’s Anaba district, a classroom of 10 women -- all teachers -- practice a lesson plan to teach their future students about numbers. The women are enrolled in a two-year U.S. Agency for International Development-funded program called “Learning for Community Empowerment.”

The program is designed to increase literacy and numeracy education, while also providing vocational training. More than 5,700 of the Panjshir Valley’s men and women participate.

“The goal is to educate and provide vocational skills to those who have not previously had the chance to attend school because of social reasons or because of the war-time environment,” said Jeremy Richart, the USAID field officer assigned to the Panjshir Provincial Reconstruction Team. As such, students tend to be older, ranging in age from high teens to 30 years old.

During the first six months of the training, the students are provided with literacy and numeracy training. Then, they select their vocational track and, ultimately, become more competitive in the job market.

During a March 24 visit to the Anaba classroom, Army Sgt. Amanda Cutler, a member of the PRT’s civil affairs team and also a women’s affairs liaison, visited with the female students.

Cultural sensitivity prevented Richart, the overall activity manager, from checking the women’s classroom progress, Cutler had the opportunity to interact with and learn more about the Afghan women.

“The class was an extraordinary site. The women were so happy about being in the class, and it was obvious in their eyes and the way they took in the information,” Cutler said.

The women also were excited to talk about the program. When one woman stopped talking, the next woman started, Cutler said.

“The women are ready and enthusiastic to start teaching others,” she said.

As students graduate from the program, their success is shared through word of mouth, encouraging others to participate.

“At first, we had problems getting women to the classes, because the families were scared that the women becoming educated might hurt the family,” Roh Afza, the female student’s trainer, said. “Now that the families are seeing the benefits to the class, there are women waiting left and right for the classes. The support from the villages is growing at a rapid rate.”

On her own time, Afza also travels to the village of Tawakh to train a woman whose family does not permit her to leave the village. Afza said she does this so the women in that village are able to receive the same opportunities the other villages receive.