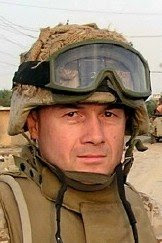 Last June, in a piece titled: "I am a M****er F***er" I told you about Lt. Col. Chessani who was part of the giant smear perpetrated on our Marines by John Murtha. You can read that here to refresh your memory.

Back in March 2009, The Thomas More Law Center released this:

ANN ARBOR, MI – Late this morning, the Navy-Marine Corps Court of Criminal Appeals sitting in Washington DC, released their unanimous decision upholding the dismissal of charges against Marine Lt. Col Jeffrey Chessani on the grounds of apparent Unlawful Command Influence. But the case may not be over yet.

Richard Thompson, President and Chief Counsel of the Thomas More Law Center, observed, “LtCol Chessani, one of the most effective combat commanders we had in Iraq, was a made political scapegoat by the civilians in the Pentagon to appease the antiwar politicians and a liberal media. In fact, we now know that the story of the ‘massacre’ that prompted the Haditha prosecutions was a headline in a Time news article instigated by insurgent propaganda operatives.”....


The next day, they released the following, and still the Lt Col was left to wonder when this will all end:

Persecution of Marine LtCol Chessani May Continue; Government Has 30 Days to Appeal Decision

But rumors abound in military circles that the government is not done with the prosecution of this loyal Marine, considered by his superiors as one of the most effective combat officers in Iraq.

The Government has 30 days from the court’s decision

(March 17, 2009) to decide if they will ask the court to reconsider their opinion, ask for an en banc decision from the entire Navy and Marine Corps Court of Appeals, or seek a petition for appeal to the Court of Appeals for the Armed Forces (CAAF) – the next higher court. ...


Today, the other shoe dropped. Again from TMLC:

ANN ARBOR, MI – Yesterday evening, government prosecutors filed a motion with the Navy-Marine Corps Court of Criminal Appeals (NMCCA), asking that the unanimous ruling of a 3-judge panel in favor of LtCol Jeffery Chessani, USMC, be reconsidered by all 9 judges of the court. A majority of these 9 judges would have to agree to take the case.

On March 17, 2009, the 3-judge panel of NMCCA unanimously vindicated the ruling by Colonel Steven A. Folsom, USMC, dismissing all charges against LtCol Chessani on the grounds of Unlawful Command Influence. LtCol Chessani is the senior-most officer criminally charged as a result of the much-publicized and ill-described “Haditha massacre.”...

You can read all of these, in their entirety, here at Thomas More Law Center. I am almost beyond speechless at the insanity that keeps this WRONG persecution of a fine Marine warrior going.

I am also beyond outraged about this piece, which gives John Murtha free rein to slander and smear any and all with immunity from prosecution:

The appeals court in Washington dismissed a defamation lawsuit brought by a Marine who led the squad in the attack. The judges agreed with Murtha that he was immune from the lawsuit because he was acting in his official role as a lawmaker when he made the comments to reporters.

Staff Sgt. Frank Wuterich of Meriden, Conn., claimed Murtha damaged his reputation by saying the squad he was leading engaged in "cold-blooded murder and war crimes" in Haditha, Iraq, on Nov. 19, 2005....

A three-judge panel on U.S. Court of Appeals for the District of Columbia Circuit found that Murtha could not be sued under the 1988 Westfall Act, which gives federal employees immunity from lawsuits arising out of acts they undertake in the course of their official duties.

U.S. District Judge Rosemary M. Collyer had refused to dismiss the suit last September and ordered Murtha to give a sworn deposition about his comments. The appeals court overturned that order and said the case must be dismissed.

Wuterich's attorney Mark S. Zaid said that despite the appeals court ruling, Murtha should apologize for his statements.

"It is disappointing that the court has placed members of Congress on a special pedestal and granted them carte blanche immunity to defame anyone they choose as part of their official responsibilities without even allowing a victim to expose the actual facts that are known only to the perpetrator," Zaid said.

There is more, much more, and you can read that here.

And the insanity continues.