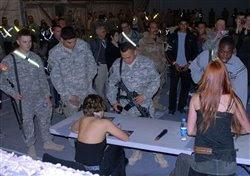 BAGRAM AIRFIELD, Afghanistan, April 1, 2009 – Troops from different service branches and different countries eagerly got into a line that wrapped around the inside of a tent here March 24 to meet four former World Wrestling Entertainment “divas.”

For more than two hours, Terry Runnels, Nora “Molly Holly” Greenwald, Christy Hemme and Shelly Martinez signed autographs and posed for photos with servicemembers and civilians at the Morale, Welfare and Recreation gym.

“Events like having the divas here give the troops a break,” Air Force Capt. Carey Caudell of Task Force Warrior said. “When you work seven days a week, you need something to take your mind off the day-to-day and just relax.”

This was the first trip to visit deployed troops for three of the divas; only Runnels had made a trip to Kuwait to visit troops before. They were invited as part of MWR’s effort to keep the morale of deployed troops high.

“The morale of troops is important, because we are away from family and friends,” said Army Pvt. Nathan Brown, 101st Airborne Division Special Troops Battalion Headquarters and Headquarters Company. “Things like this helps remind us that we are still supported.”

Hemme said she wanted to do the tour because she didn’t want the “filtered version of the war” and wanted to see things for herself.

“People back home will never really understand how things are here without actually having ever been here,” Martinez agreed.

In addition to Bagram, the divas also visited a couple of forward operating bases, but weather forced cancellation of planned visits to some smaller bases. “It felt as if my heart was ripped out when we realized we were going to miss a few stops,” Hemme said.

The women made every moment count by visiting with the troops as often as possible. Aside from meals, sleeping and an hour of shopping, the majority of their time was spent with troops. But even during meals, they were happy to take a break for photos and autographs. Their goal was to show their appreciation to the troops and remind them that people back home support them.

“It makes us happy to see [troops] happy,” said Runnels, who added she felt honored and humbled by her experience here.

The divas never said “You’re welcome” when troops thanked them for being here, Kevin Dessart, the diva’s tour manager, observed. Their response always was “No! Thank you,” he said.

From the looks on the troops’ faces, the divas succeeded in their mission to boost morale.

“The divas are the best tour we have had so far because of their genuine concern, curiosity and overall love for the troops,” Air Force Master Sgt. Mark Gore, an MWR planner, said.

More entertainers supporting our troops! And that IS B*N*S*N!!
Posted by The Brat at 4:44 AM