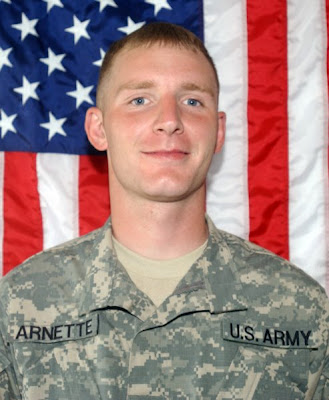 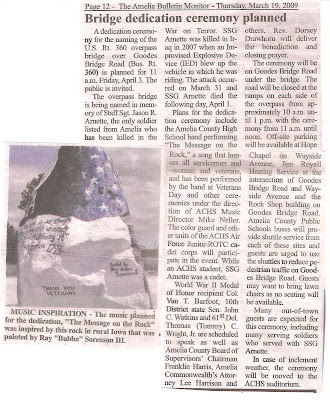 Today in Amelia County, Virginia, a very special ceremony is being held to rename a bridge as the SSG JASON R ARNETTE MEMORIAL BRIDGE.


Jason Arnette, beloved precious son of Mickey, was born on November 7, 1982 in Richmond, Virginia. He grew up like most asthmatic kids: long, last-minute drives to the hospital at regular intervals throughout childhood. His mom, Michelle, would frequently have to go and get him at school and drive over 50 miles to the doctor's office. It seemed there was no way to avoid it. Jason's father, Bill, had died in 2006 from complications of lung disease - one year to the day of Jason's own death. It ran in the family. Miraculously, he never had an asthma attack on the sports field. Since he was old enough to walk, Jason had wanted to be a Soldier... [They Have Names here]

Jason was a fine soldier, whose whole attitude in life was one of determination, honor, loyalty.

Today will be a bittersweet day for Mickey, Jason's mom. Her speech is a speech no mother ever wants to give but she does Jason proud. She sent me that speech, and I want to share some of it with you here:

"Welcome, Honored Guests, Friends and most of all My Family,

One of Jason's dreams was to be the BEST OF BEST. He pushed himself to do the Best that he could strive for. That is the example he set for all us all. He wanted to go down in the record books being famous. And I guess he got that wish. He will never be Forgotten.

He wrote a letter for my Birthday one year: let me read some of it to you now;

So your little man has now grown up. Ready to step in to the world stronger than ever. Just to let you know that you are my motivation with all things, all through life you have made me feel like I am the best at whatever it was I was doing or have done. I want to thank you for loving me the way you do. One thing I will always remember about myself is I always had my mother to keep me safe, I always had your love, and you pushed me along for all things and you would fight for me no matter what. Thank you Mom I will always love you. Love, Your little man Dayday.

Thank you for being here in Amelia County Virginia and the great country in the world The USA. This was Jason's hometown and home to many that are present here today. Jason would have thanked you too for he loved a party. He once thanked me for giving him a party that brought so many people together. That party was in March of 2002. It was a going away party for he was leaving for Basic Training. Jason loved to be around all kinds of people, for he never met a stranger. ...

What is a HERO?

Many heroes are everyday people like the person to your right or left. Someone we look up to and respect. Most heroes are humble, but always have someone's best interest at heart. Jason had many Heroes. One was his father, who was always there for him. His sister Tonya that he looked up to for friendship and advice. Shelby who he wanted to be more like in his school work and so much more. Some of his teachers who taught him many things. His coaches for their guidance and helping hands. His pastor Rev Dorsey Drawhorn for spiritual guidance and patience. His friends who taught so many things and were always there for him. Even a deputy who did not write a ticket one night when he deserved it. His army buddies for friendship, love and more guidance. And more than one person could explain or understand. God was his Hero too. Jason looked to God for all things and accepted God's love unconditionally. These are just to name a few.

I would like to quote another Gold Star Mother;

I ask you to think about what a Bridge is. Is it just a physical structure built to span over a road? Is it just for the purpose of a passage from one place to another? No, it can also be a symbolic passage to an important place or state of mind.

This bridge SSG JASON R ARNETTE MEMORIAL BRIDGE is a symbol that will bridge the past, present, and generations of come.. It has strength, that lets us remember Jason's strength and determination to get a job or mission done, no matter what challenge lies ahead without regrets. It is a symbol of love Jason not only had for us as a family, but the love he had for all mankind, not matter their race or beliefs. You see Jason looked to your heart and saw you and the good in you always. It is a symbol of the passion Jason had for life. It is hope for a better future here and all across the world. It is Freedom for all. This is a challenge for all of us, to see if we can be somewhat like Jason in his deeds. You see, there was no challenge that Jason didn't try to overcome. He always found a way even if the situation seemed impossible. This Bridge is a symbol of his spirit and inspiration. This bridge is a symbol for all of us to try and succeed in all that we do. Have patience and never give up your dreams. For all things are possible if we believe. ..."

Jason will always be a precious son, a beloved husband, a soldier.

On April 1, 2007, SSG Jason Arnette was killed in an IED blast - adjusted for time differences, exactly one year to the day his father died. Jason's ashes were mixed with his father's and buried at Arlington National Cemetary, exactly where he wanted to spend eternity. ...

There is so much to know about this fine young hero. For a full profile of him, go to They Have Names here. Most of the pictures here I got from there, and also mom Mickey's FaceBook page. (Thank you, Mickey and thank you, CJ!)

Today is a celebration of Jason's life. Today is a renaming of a bridge so that future generations of Americans will always honor and remember that a special hero lived among them. Just as Jason's life, his love and his faith connected all who care about him, so now will this bridge be a tangible remembrance connecting those hearts for all eternity.

As his mom ends her speech today:

This bridge also represents all of past veterans who stood before Jason, who stood with him, for those who stand for him today, but most of all those who will stand in his place.

There was once a soldier whose last words were:

Abraham Lincoln once said: And in the end it's not the years in your life that count. It's the life in your years.

I want to ask each of you to be sure that when you see a Veteran go to him or her shake their hand or hug them and tell them THANK YOU, They deserve so much more.

Soar through the heavens, Jason. I will always remember and honour you.