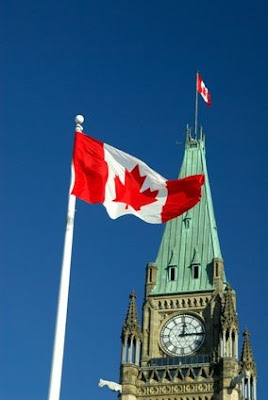 Commander Josee Kurtz listens to questions from reporters during a tour of the HMCS Halifax on Tuesday April 7, 2009 at the HMC dockyards in Halifax, Nova Scotia. Commander Kurtz is the first woman to command a warship. (The Canadian Press/ Mike Dembeck)

A 20-year veteran of the Canadian navy became the first woman to take command of a major warship on Tuesday when she took HMCS Halifax out on the water during an early morning news conference.

Cmdr. Josee Kurtz, who joined the Canadian Forces in 1988, is the eleventh commander of the frigate.

The Navy appointed another woman, Lieut. Cmdr. Marta Mulkins, to command a coastal patrol vessel in 2003. But Kurtz is the first woman to command a major warship and joins an extremely elite group -- Canada has only 12 frigates and three destroyers.

"This is probably one of the best days of my life," Kurtz told reporters earlier at HMC Dockyard in Halifax before she took the vessel into the harbour.

Kurtz began her career as a navigator, and became a navigation instructor in the mid-1990s. She is also trained as a weapons and combat officer.

Kurtz joined the navy at a time when it was first opening its doors to women. A discrimination complaint had spurred The Human Rights Commission to order the Canadian Forces to open up all occupations to females.

Kurtz said she had to prove herself time and again as she moved up the navy's ranks.

"You are tested and you are scrutinized," she said.

"There was some reluctance when we first joined . . . but when they realize you can do the job just as well, that scrutiny goes away."...

Go read the rest of this history making story here.

And what an impressive woman she is. From the official Canadian Navy page:

Commander Josée Kurtz (née Boisclair) was born in Joliette, Québec. She joined the Canadian Forces in 1988 under the Officer Candidate Training Programme after completing a college diploma in Humanities.

Following initial naval training, Commander Kurtz was posted to HMCS PROVIDER where she was awarded her bridge watchkeeping certificate in 1991. She then specialized in navigation, completing both the Destroyer Navigation Officer course (1992) and the Maritime Advanced Navigation Officer course (1995), and navigated HMC Ships NIPIGON, VILLE DE QUÉBEC, as an officer of the commissioning crew, and the deep draught PROTECTEUR. She also had the privilege to share her interest and knowledge in navigation during two separate postings to VENTURE, The Naval Officer Training Centre, first as navigation instructor (1994-96), and subsequently as Fleet Navigation Instructor and Head of the Navigation Department (2000-02) where she led broader issues related to standards, equipment and policy.

Commander Kurtz attended the year-long Operations Room Officer Course in 1997. On completion, she joined HMCS VANCOUVER performing the duties of Weapons Officer and Combat Officer. She completed her tour as Executive Officer of HMCS VILLE DE QUÉBEC from 2007 to 2009. During this period the ship deployed with the Standing NATO Maritime Group 1 and was diverted on short notice for an anti-piracy escort mission with the United Nations World Food Programme to deliver much needed food aid to Somalia. Commander Kurtz’ staff experience includes the duties of Analyst in the Directorate of Grievance Administration and Chief of the Maritime Staff’s Desk Officer for international operations, at National Defence Headquarters.

Commander Kurtz holds a Bachelor of Arts from the University of Ottawa (2005), a Masters in Defence Studies from the Royal Military College of Canada (2007) and is a graduate of the Joint Command and Staff Programme at the Canadian Forces College in Toronto. She assumed command of HMCS HALIFAX on 6 April 2009 and is extremely proud to lead the ship during the Canadian Naval Centennial.

During her free time, Commander Kurtz enjoys family activities with her husband John, a retired naval officer with 20 years of service, their daughter Dominique, and dog Morgan.[here]

Congratulations, Commander. Thank YOU for your service.