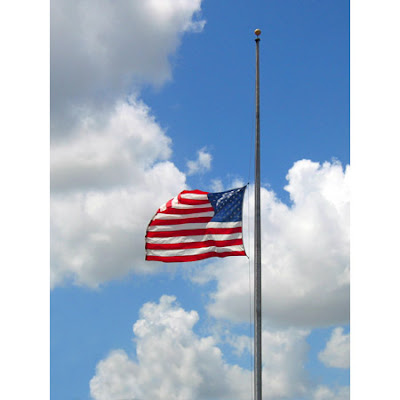 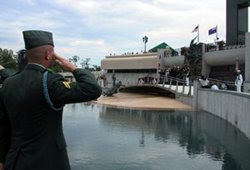 A soldier from the 29th Infantry Division overlooks the newly-dedicated National D-Day Memorial as he renders a salute during the playing of “Taps.” (Photo by Maj. A. A. Puryear, Virginia National Guard) 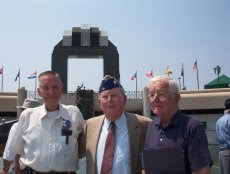 Elisha Ray Nance (center) stands with fellow World War II veterans Kenneth Dooley (left) and Roy Stevens at the National D-Day Memorial in Bedford. Jim McCann, site operations manager, said Nance visited the memorial more often after Stevens' death in 2007. "I think he was doing what he could to honor the other guys who can't come anymore," McCann said. 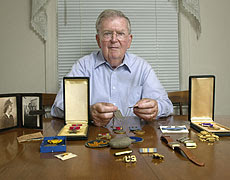 World War II veteran and D-Day soldier Ray Nance at his Bedford County home with some of his war memorabilia, including a Bronze Star, Purple Heart and a stone from Omaha Beach.

Elisha Ray Nance was one of the Bedford Boys:

The end of an era:

Nance was one of 34 soldiers from the Bedford area who landed on Omaha Beach on D-Day.

Elisha Ray Nance died at the Elks National Home in Bedford on Sunday, less than two months before the 65th anniversary of D-Day.

Nance, 94, was the last surviving officer of Company A and the last surviving Bedford Boy. He was one of 34 servicemen from the Bedford area who landed on the beaches of Nazi-held France during World War II in the first waves of the largest land, air and sea invasion in military history.

On June 6, 1944, 19 of the 34 Bedford men in Company A of the 116th Infantry were killed on Omaha Beach. The death toll is considered one of the largest per capita suffered by any American community during the invasion, a fact instrumental in establishing the National D-Day Memorial in Bedford.

Nance and the other Bedford Boys were members of the Virginia National Guard. The young men joined the Guard to earn an extra dollar during the years after the Great Depression. Before D-Day, none of the Boys had seen combat.

In Alex Kershaw's book "The Bedford Boys," Nance recounted crawling onto Omaha Beach and facing the corpses of fallen fellow soldiers from Company A that morning. As he scrambled for cover, he was hit in the right foot by enemy fire. He also suffered a shrapnel wound in one hand.

As Nance remembered dodging bullets, he described feelings of hopelessness and despair.

"They [bullets] came so close," Nance said in an interview with Kershaw. "Then, suddenly, when I thought there was no more hope, I looked up into the sky. I didn't see anything up there. But I felt something settle over me. I got this warm feeling. I felt as if somehow I was going to live."

Nance, who trained many of the Bedford Boys and felt responsible for their safety, was plagued by survivor's guilt, post-traumatic stress disorder and frequent nightmares. Despite it all, he maintained a sense of patriotism....(here)

And there is more:

...Elisha Ray Nance was one of 34 servicemen from the Bedford area, who landed on Omaha Beach in Normandy, France on June 6, 1944.

Nineteen of the 34 Bedford Soldiers in Company A of the 116th Infantry were killed on Omaha Beach. The death toll is considered one of the largest per capita suffered by any American community during the invasion.

A National D-Day Memorial was established in Bedford in 2001 for the Soldiers, who fought their way onto the beaches during the first two waves of the great D-Day invasion.

German defenders virtually wiped out isolated Company A of Bedford, Va., in 15 minutes. “Of the 200-plus men of the company, only a couple of dozen survived and virtually all of them were wounded,” wrote the late historian Stephen Ambrose in his best-selling book, “D-Day.”

Other Soldiers in the 116th, however, survived the German’s deadline fire to help secure the beachhead and begin the liberation of France and Europe.

Nance was featured in Alex Kershaw's book "The Bedford Boys." He described crawling onto Omaha Beach and facing the corpses of fallen fellow soldiers from Company A. He was hit in the right foot by enemy fire and suffered a shrapnel wound in one hand....

Nance was the only officer in the company who made it home. He earned the Bronze Star and Purple Heart for his service....(here)

Follow the links, spend some time and get to know the last remaining hero of the Bedford Boys. There is also a Guest Book to offer condolences, respect, here.