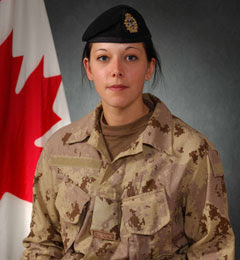 KABUL, Afghanistan — The second Canadian female soldier to be killed in Afghanistan died Monday when the light armoured vehicle she was patrolling in struck an improvised explosive device.

Trooper Karine Blais, who had arrived just days ago from Canada with the 12th Armoured Regiment based in Val Cartier, Que., was killed in action when her vehicle was hit by a homemade bomb.

Blais, 21, was the 117th Canadian to be killed in Afghanistan since the start of the conflict in 2002.

Four other Canadian soldiers were injured in the attack, which happened about one hour before dusk in Shah Wali Kowt, a district about 40 kilometres northwest of Kandahar City that is known to be a centre of Taliban activity.

"She was an energetic person who always gave 100 per cent," said Brig.-Gen. Jon Vance, the Canadian task force commander. "She has a great sense [of humour] and truth and was remarked upon for her honesty. Frank and direct, she showed strong leadership qualities and was respected by all the members of her squadron. She will be missed."

Blais is survived by her mother, Josee, her grandmother, Laurette, and her brother, Billy.

"The days and months ahead will be extremely difficult for all who knew Karine, and we must stand together to support all of those for whom she had a profound influence," Vance said, alternating between French and English.

"This young woman's life did not go to waste. She believed in her role in Afghanistan and her dedication to the overall mission is beyond commendable."

Blais's armoured regiment, often referred to by its French acronym, 12 RBC, is attached to the Royal 22nd Regiment Battle Group, which is to officially take over responsibility for Kandahar on Tuesday morning from a battle group built around the Petawawa, Ont.-based Royal Canadian Regiment.

The wounded soldiers on Monday were taken by helicopter to the Canadian-led multinational hospital at Kandahar Airfield. Their names were not released, as per military custom. Two remained in hospital Tuesday, while two were treated and released....[here]

Email ThisBlogThis!Share to TwitterShare to FacebookShare to Pinterest
Labels: Canada - Some Gave All Trooper Karine Blais

Prayers for her family and loved ones.