THIS just in from Bratdog: Benny retires 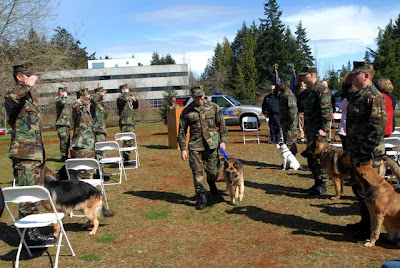 
He joined base commander Capt. Mark Olson at the podium to accept a Navy Commendation Medal, a plaque from Navy Region Northwest with a letter of appreciation from its commander, Rear Adm. James Symonds, an American flag, a stunning blue “civilian” leash and a paw shake.

Benny’s first handler, Michael DeBock, traveled from Duvall to speak to a crowd of about 30 people and six of Benny’s kennel mates.

Benny, a military service dog, enjoys a bite of his retirement cake after formal ceremonies at Naval Base Kitsap-Bangor. With Benny is his handler, Allan Tetreault, who has worked with the German shepherd for 18 months. (Steve Zugschwerdt | For the Kitsap Sun)

“Out of all the dogs I handled in the military, Benny by far was my favorite,” said DeBock, now retired from the Navy and a police sergeant. “I’ll never forget him. He was definitely the best patrol pal anyone could ask for.”

Looking down at Benny, he added, “Enjoy long days basking in the sun. You deserve it.”

Benny got off to a rough start. Straight out of training at Lackland Air Force Base in San Antonio, the puppy just wanted to play. But soon he became a top performer.

In January 2000, he earned the top dog award at a Naval Base Kitsap competition. Three months later, he and DeBock finished fourth out of 58 teams from around the world at a competition in San Antonio, were the top Navy team there, and were featured in a magazine.

Benny, a military service dog for 11 years, was the guest of honor at a retirement ceremony Tuesday at Naval Base Kitsap-Bangor. Benny’s handler, Allan Tetreault, led Benny past the Bangor canine unit to the podium. (Steve Zugschwerdt | For the Kitsap Sun)

Benny served at Bangor from March 1998 to December 2008, playing a key role in ensuring a drug-free workplace by inspecting buildings, bachelor housing rooms, vehicles and submarines. He also served two stints in Iraq and another in Kuwait.

Military service dog Benny, center, and handler Allan Tetreault pose with other members of the Naval Base Kitsap-Bangor canine unit. (Steve Zugschwerdt | For the Kitsap Sun)

The dog’s handler gets first dibs on him, then the other handlers have a chance. If none of them take him, members of the public can sign up at www.workingdog.com to adopt one. In Benny’s case, he was adopted by a woman who owns a horse ranch in Illinois.

Unlike police dogs, military dogs don’t live with their handlers, and their handlers change more often because sailors don’t usually stay at one base for long. The dogs are retired when they’re physically unable to perform or, like people, when they get tired of working, Tetreault said.

The civilian leash represents a dog’s working days are over and he can go home and be a dog.

“He was much more than a dog,” said Chief Amanda Cooper of Naval Base Kitsap Security, the master of ceremonies. “He was a friend and companion who put his life on the line to protect others. Military Working Dog Benny, you stand relieved. We have the watch.”

Mike DeBock, left, and Allan Tetreault visit while military service dog Benny finishes up his retirement cake Tuesday at Naval Base Kitsap-Bangor. DeBock was Benny’s first handler at Bangor, and Tetreault his last. Benny is retiring after 11 years and has been adopted by a horse ranch owner in Illinois. (Steve Zugschwerdt | For the Kitsap Sun)

You really MUST go read more about Benny. The above video and story was from K9 Pride. Start here. Thank you for your service Benny. BIG slurps to you from Bratdog.
Posted by The Brat at 6:47 AM