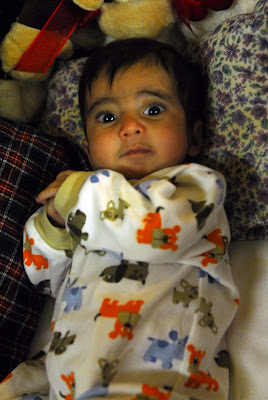 Rather than discussing troop disposition and battle status, the soldiers were passing along information about bottle feedings and sleeping schedules.

For the past few months, the CJSOTF-A troops have been caring for an Afghan baby boy named Ramazan, who is approximately nine months old. On this day, the troops said good-bye to Ramazan as they transferred his care over to a team of doctors at a medical facility in Kabul.

The wide-eyed baby was first put into the care of the Americans after his father brought him to a Special Operations Forces clinic in Shindand District, Herat Province, in late January....

Go over to Bouhammer's and read the rest of this story that you wil NOT see in the msm. Here.