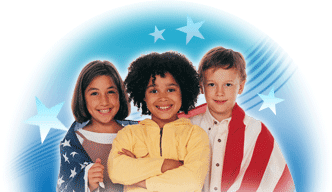 APRIL IS THE
Month of the Military Child

April is Month of the Military Child! This special celebration is a legacy of former Defense Secretary Caspar Weinberger – established to underscore the important role children play in the Armed Forces community. Army Garrisons plan numerous events ranging from picnics and parades to recreational fairs and fun festivals – all to recognize and applaud Families and their children, who are everyday heroes, for the daily sacrifices for they make in supporting America’s Army.[here]

By Tom Budzyna, USAG Schinnen
[bratnote: I screwed up the picture, so follow the link below to take a look. Sorry!]

SCHINNEN, the Netherlands -- April is the Month of the Military Child, and one might expect an article describing the nouns and verbs that could be embroidered on a military child's "been there, done that" t-shirt.

But this is a "here now, doing something" kind of story.

And in the midst of a bunch of grown-ups who've dedicated time to set up community service information booths, refreshment stands, egg decorating events and more, there is one teenager in charge of a Child Safety Awareness and Missing Persons Identification booth.

Sean Ballard, a 16-year-old Life Scout in Troop 100, and his Eagle Scout project is all about helping parents protect children. More than 2,000 children go missing every day in the United States and, depending on its population, police in European countries face anywhere from four to eight reports of missing children each day.

Time is the enemy when a child goes missing.

Stateside, there is the Amber Alert Program, a voluntary partnership between law-enforcement agencies, broadcasters, transportation agencies, and the wireless industry, to activate an urgent bulletin in the most serious child-abduction cases. The goal of an AMBER Alert is to instantly galvanize the entire community to assist in the search for and the safe recovery of the child.

Ballard's booth will introduce visitors to a European version of Amber Alert. In fact, many European nations, including the Netherlands, have adopted the "Amber Alert" moniker to describe the network they use to search for missing children.

"The National Center for Missing and Exploited Children is a secondary distribution source for the AMBER Alert program," says Ballard, pointing out that it has been used in the Netherlands to help authorities find children who've gone missing. Visitors to his booth will receive information about this organization and be given the tools necessary to register their children.

Ballard points out that the best way to help protect the ones you love is by gathering important information before an emergency. That means right now is a good time, or you can take action at the Brunssum Easter Egg Hunt.

Ballard will take pictures of children and then provide the picture on a compact disc with the forms required for the registration process to be completed.

Ballard, whose booth will also feature presentations to educate children and parents about child safety awareness, has taken his Eagle Scout project to the airwaves and can be heard in the tri-border region on Canadian Forces Network radio.

'Here now, doing something' is the precursor of the best kind of 'been there, done that' t-shirt a military child, or parent, can wear.

Besides the first hunt that begins promptly at 10:45 a.m., there will be additional hunts, divided by age group that will take place throughout the morning. Face painting, egg decorating, scavenger hunts, and many more activities go on until 1 p.m. Save the date. Get your Easter baskets ready; the rabbit will be there.