I have written more than a few times about Islamic terrorists using their kids as suicide bombers.  Unfortunately, this phenomenon is not new.

This week comes a story of the latest little girl who was used as a tool.

From The Telegraph (UK): 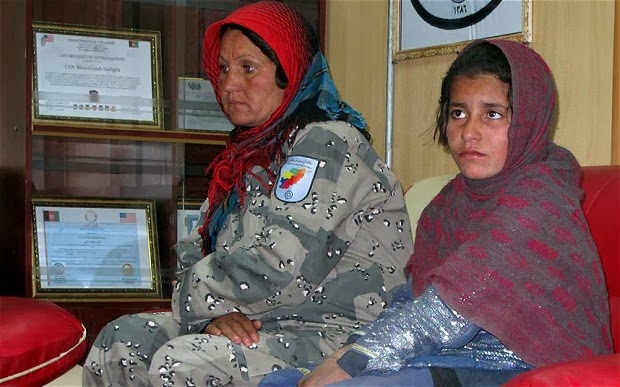 The girl, named as Spogmai, (R) had been convinced to attack border police Photo: EPA

An Afghan girl believed to be about 10-years-old was caught in Helmand province wearing a bomb vest after her brother encouraged her to carry out a suicide attack, police officials said.

The girl, named as Spogmai, had been convinced to attack border police after male relatives accused her of having “illicit relations” with officers, according to reports.
She was strapped into a bomb harness by one of her elder brothers and sent across a river to her target, in southern Helmand.

However Spogmai began crying with cold while crossing the river and her brother, a suspected Taliban commander called Zahir, fled according to the Pajhwok news agency.
Some reports said she was still wearing the vest when she handed herself in to the police and others said Zahir took it with him....


There is more here.  Be sure to check out some of the other links on this article. As noted above, this is not news, but it seems that more news outlets are finally noticing.

The National Directorate of Security (NDS) has suggested that the trend of children educated in Pakistani madrases being used by militants for suicide attacks has grown, posing an increasing security threat and difficulty for Afghan society in the longterm.

NDS officials called on Afghan families to protect their children and stop sending them to Pakistani Madrassas for religious education. The security agency argued that the kids are not taught religion, but recruited into the militancy and often sexually abused.

"The government armed insurgents abuse the children and use them for suicide attacks," NDS spokesman Farid Shamal said. "Last year, we registered at least 15 individuals and three of them had been sexually abused."

Human rights advocates and religious scholars have condemned the madrassas and declared the abuse of children and coercion of kids into suicide attacks for the Taliban and other militant groups a violation of Islamic principles and basic human values....


"We will only have peace...when they love their children more than they hate us.”