You remember this murderer? Turns out that while awaiting trial, he made speshul requests to ease his 'suffering'... 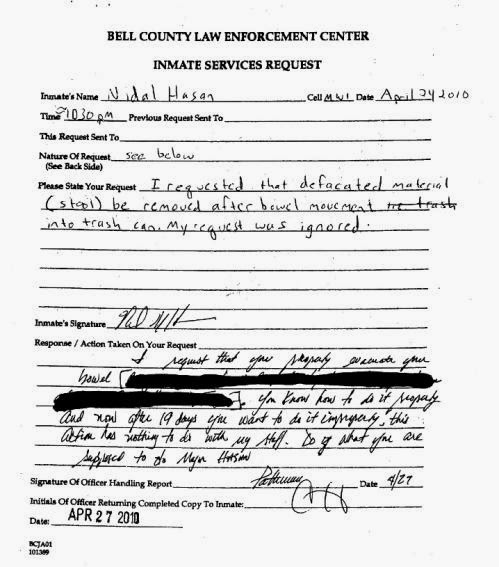 Probably he was just trying to annoy the staff, but I wonder if his defecating into garbage cans had anything to do with Islam's prohibition on urinating "into holes" and "in waterways...in still water, or in less than 216 liters of running water" ('Umdat al-Salik E9.1 (15)). Most likely he was just tying up the time and resources of the Infidels with his endless demands.

"Prison to Fort Hood Jihadist: 'You’re a Grown Man. Act Like it.,'" by Daniel Greenfield for FrontPage, January 2 [...]

Muslim Fort Hood terrorist Nidal Hasan who carried out the Fort Hood Massacre ran up quite a tab while in prison.

Galligan believes many of the things the government did in the name of security were an excessive use of taxpayer money, including the nearly $200,000 spent on daily helicopter rides to ferry Hasan from the jail to Fort Hood.

The Army also spent tens of thousands of dollars setting up a private Fort Hood office for Hasan, who insisted on representing himself at trial, where he could prepare his own defense....

Much more here, and do not forget  that he still gets paid his salary. (Long time readers know MY editorial comment!) 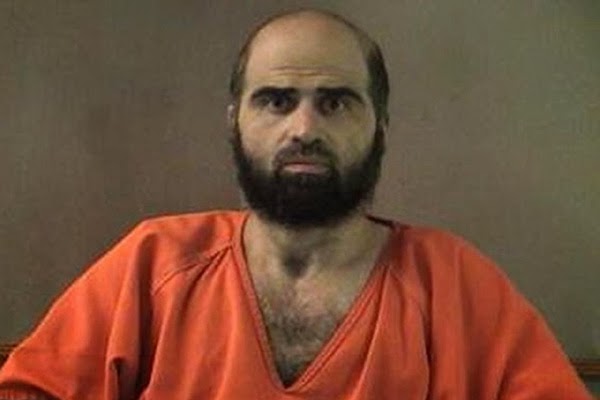 Associated Press | Dec 30, 2013
DALLAS - The former Army psychiatrist who killed 13 people at Fort Hood made several requests of the Texas jail where he was held before he stood trial, including one for a copy of the Bible and another for the name of the company that made the cheese in his sandwiches.

Nidal Hasan was held at the Bell County Jail for nearly 4 years before his August court-martial for the 2009 attack at the Army post. Hasan was convicted and sentenced to death.

In April, Hasan asked: "Please tell me the name of the company that produces the white cheese on my sandwiches; also the type of cheese i.e. mozzarella."

Hasan is a Muslim who insisted on keeping a beard during his trial as an expression of his faith. John Galligan, his civil attorney, told the television station that Hasan was likely concerned about whether his food was being prepared according to Islamic dietary standards.

The costs of jailing Hasan included a guard to watch him at least 12 hours a day and daily helicopter rides from the jail to the Fort Hood courthouse during his trial....