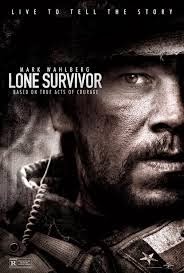 I have NO intention of writing my own review about a movie based on Marcus Luttrell's book Lone Survivor.  Despite a brief career long ago and far away as a film and book reviewer, I have NO direct Military experience (have never served) so I am not qualified to speak with authority on movies such as Lone Survivor..Of course, along with everybody else I have watched as *professional, expert* movie reviewers have displayed their obvious ignorance - not just on Military matters, but on the objective/purpose of what an actual movie review IS.

Two movie reviews I want to share here, from folks who know what they are talking about.

As the war in Afghanistan winds down, and as the American public is increasingly “war weary” (a phrase I find fascinating since at any given time only 0.6 percent of Americans are in uniform, and the vast majority of Americans have endured not one single second of sacrifice for the war effort since 9/11), anti-military and anti-American sentiment may be rediscovering its Vietnam-era voice. The vehicle for the latest two minutes’ hate is a bit curious, however. Lone Survivor tells the story of a SEAL mission gone wrong and the resulting firefight where a small band of SEALs displayed remarkable courage under fire. But they showed more than courage. An act of humanity sealed their fate — the decision to free Afghan civilians that stumbled into their path. With their own lives on the line, they obeyed American rules of engagement, obeyed the laws of war, and conducted themselves with honor (with one SEAL posthumously awarded the Medal of Honor).

So how do some in the left-wing press write about this movie? Here’s L.A. Weekly:...


No, I refuse to excerpt the moron over at LA Weekly here, but go read French's full review here.

Then there is this from Brent Bozell:

The Heroes of 'Lone Survivor'

A few years back, during the Media Research Center's annual gala, I was honored to pay tribute to the family of a real American hero, Michael Murphy, the Navy SEAL posthumously awarded the first Congressional Medal of Honor for service in Afghanistan, and the first since the Vietnam War. Few in the room knew the story because only Fox and a handful of other outlets told it.
When the medal was announced in 2007, William Kristol noted on "Fox News Sunday" that the news received a tiny fraction of the coverage given to the Nobel Peace Prize. The Nobel that year was awarded to Al Gore and the U.N. "climate change" alarmists. That award received endless accolades from the sycophantic press. Kristol joked about the fans oozing over "what sacrifices he made" to make a scary documentary (while making fortunes of money off the issue as well).

Murphy made the ultimate sacrifice -- his life -- and yet, as Kristol noted about the Long Island native, not even the "all the news that's fit to print" people covered the story. "Michael Murphy gets the Congressional Medal of Honor, and The New York Times, our leading newspaper and the local newspaper in this case, can't notice it. There's something sick about our culture when we don't acknowledge genuine heroes."

Now -- finally! -- this story has been taken into theaters, with the movie "Lone Survivor," based on the memoir by Marcus Luttrell, the only SEAL to survive that day. The result: it "red-white-and-blew away the box office,"  ...

I DO have opinions on whether a professional book or movie reviewer has to be familiar with the subject matter, but in this case my opinions on this book or this movie are irrelevant. Years ago, I had a heated back and forth with a nationally syndicated movie reviewer about a movie (one of the stars of which I am well 'familiar' with,) based on a famous novel by a famous writer.  The reviewer made some valid points which, even if I remain in disagreement with the harsh words from him about that movie, (and the performance of my loved one) his insights on movie reviewing were valid.   Despite some reviewers' apparent belief that what they write is all and always about them - the writer - in this case specifically, in THIS movie about THESE Heroes,  it most certainly is not.   This movie review is not the right place for 'keyboard warriors' to be making ignorant political points.

My regular readers know very well I have strong political opinions (gasp) but there is a time and a place for those.   Reviewing Lone Survivor is about honouring and respecting the sacrifices made in Operation Red Wing.

Any reviewer who can't leave their political agenda at home, for THIS movie, needs to stay home with those views.  Period.

I cannot bring myself to watch this movie, I can't even let myself think about it. I know with my heart almost more than I can bear of the sacrifices and the realities of those sacrifices. Merciful God in heaven, help us all, mankind cannot direct itself. Those who are consumed with hate, who in narcissism and blasphemy claim to advance the will of God, serve the enemy of God. Their minds can conceive of horrors I cannot bear to think of. Thank God for these men who willingly stand between me and the enemy. I am incapable of defending myself against them. I will support them in every way I can, I try to every day. I cannot watch this which so realistically portrays the nature of their sacrifices. It overwhelms my heart with grief to see our sons and daughters portrayed in their sacrifice.