From the Royal Air Force:


Jan 30, 2014
Check out the view from the Tornado GR4 cockpit of a modern day Dambuster as they prepare for and fly their final mission in Afghanistan. Feel what it's like to fly with them as they protect coalition troops on the ground and help to build an enduring security and peace for Afghanistan. 30 Jan 2014.

An RAF squadron famous for carrying out one of the most daring raids of the Second World War has flown its final Afghanistan mission. 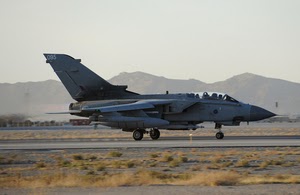 A 617 Squadron Tornado aircraft on the runway at Kandahar Airfield

More than 70 years after its creation, the RAF’s 617 Squadron, known as ‘The Dambusters’, has completed its last operational mission as a Tornado squadron with a flight in the skies over Afghanistan.

This last flight was a mission in support of coalition troops that involved providing protection and relaying information from above directly to commanders on the ground; a task that has now been handed over to No 2 (Army Co-operation) Squadron from RAF Marham.

617 Squadron is due to disband on 1 April, but will reform as the RAF’s first Lightning II squadron in 2018.

Now their mission in Afghanistan is over, Wing Commander David Arthurton will bring the Dambusters back home to RAF Lossiemouth. He said:

It is fitting that this milestone event occurred on operations, delivering decisive air power much as our forebears did in 1943. Back then the squadron was employed on offensive operations whereas today we’re trying to set the conditions for enduring security and peace.

I think there are many parallels – the team spirit that existed back then endures to this day and I think the focus on getting the job done is exactly the same...