Calling President Obama:  Get out the red crayon, STAT! 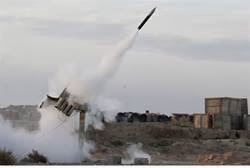 Illustration: Rebels fire a rocket near Raqqa, Syria (Reuters)
Rocket fire reported on Lebanese border; it is unclear how many rockets fell or if the fire was intentional.
1/17/2014 By Tova Dvorin

Rockets - and possibly shells - were fired from Syria into Lebanon Friday, landing in the Lebanese border town of Arsal, according to official state news.

The rockets have reportedly killed 7 and wounded at least 15.

According to Lebanese news outlet The Daily Star, facts on the ground contradict official news announcements, which state that only 1 rocket hit the city. Local security forces reportedly told the agency that at least seven rockets fell in the area.

In addition, security forces have reported to the Egyptian outlet Ahram Online that that number is closer to 20 - and includes both rockets and shells. Ahmad al-Hojairi, an official in Arsal, said it was unclear if Friday's casualties were Lebanese or Syrian.

"What we can confirm is that six or seven rockets launched from Syria hit a residential area. Two of the rockets hit houses," Hojairi stated. ...

Email ThisBlogThis!Share to TwitterShare to FacebookShare to Pinterest
Labels: Syria rockets into Lebanese