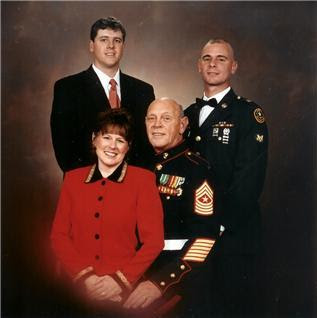 A Boy Named Patrick - A Children's Story, written by his mom Deborah Tainsh:

There was once a man named David who was a United States Marine. He went to a war in a place called Vietnam in 1966 to help bring freedom. After he came home from that war he kept on being a Marine and in 1970 he had a little boy named Patrick who loved football, beaches, surfing, and skateboarding, and especially reading. Patrick watched his dad be a Marine for over twenty years. During this time Patrick kept reading not only surfing and skateboarding magazines, but history books, too. One day when Patrick was a man, he told his dad and best friend, “I want to do something that will make a difference in the world, I’m going to be a soldier.” And so he did. And in 1999 he went to Fort Knox, Kentucky for boot camp and then went to Fort Polk, Louisiana where he worked and trained hard to become a United States Army Cavalry Scout. Then in 2003 Patrick had to say good bye to his mom and dad because he had to go fight a war in Iraq to protect his country, friends, and family from terrorists and to help fight for the freedoms of the boys and girls in that country where they and their families were treated very badly by their country’s leader. Patrick once wrote a letter to his mom and dad telling them that he cried for the children because they were hungry and he didn’t have food to give them. He said he couldn’t understand how a country’s leader could treat the people so badly and make them live in such dirty conditions with trash and wild dogs everywhere. And so Patrick's mom and dad keep a photo in their living room of Patrick surrounded by Iraqi children.

Almost a year after Patrick had been fighting the enemy in Iraq so very hard with his other soldier friends he was killed and went to live with God. But his mom and dad were so very proud that he had died while serving others by helping to create their freedoms like the ones he had loved as an American. They knew that so many boys and girls in America had grown up and died using bad drugs or drinking alcohol, and this made them sadder for those children and their moms and dads.

Before Patrick died he wrote a letter that his mom and dad would receive if he did not get to come home to live again. In that letter he said that he wanted his family and friends to be proud of him and to always remember him for who he was and who he had become. He wrote that he had never been prouder of anything than to fight and die with an American flag on his shoulder. That he was never prouder than to be a United States Army Cavalry Scout. And that he hoped the people of Iraq would someday enjoy the same freedoms that he had enjoyed as an American.

So, if it were not for men like Patrick, his dad, and other moms and dads of today and in the years before today, other people in other countries would never get to live in such freedom and our freedoms could be taken away. The freedom of democracy, a government by the people and for the people, the freedom of speech, the freedom to pray, the freedom to go to church, and school, the freedom to have equal rights between men and women, the freedom to own a business and homes, and to travel anywhere we want to in our beautiful land, from sea to shining sea.

So we honor the brave soldiers like Patrick thanks to President Woodrow Wilson. One year after the end of World War I, in 1919, on Armistice (truce) day November 11, the day that commemorated the end of WWI on November 11, 1918 when the fighting stopped at 11 a.m., the 11th hour of the 11th day of the 11th month, a proclamation was created to express the pride in the heroism of those who had died during the war. In 1938 the Congress of the United States declared it a federal holiday. In 1954 the name of the holiday was changed from Armistice Day to Veterans Day to honor all those American veterans who have served in all wars to protect our country and our freedoms.

So Patrick and all his soldier friends who still live are veterans and we celebrate them on Veteran’s day because these brave men and women, too, stand in front of us to protect us and to keep our flag and freedoms safe from those who want to hurt us and our country.

God bless all our soldiers and veterans and God bless America.


"......Patrick...wanted his family and friends to be proud of him and to always remember him for who he was and who he had become..."

Thank YOU, Deb and Dave, for raising such a man. God bless you both.


I originally posted that on Tanker Bros here, where you will find the occasion that Deb shared this with a whole bunch of school children.

Patrick was also one of our Wednesday Heroes last year here.