AFG: Karzai hostile to US presence 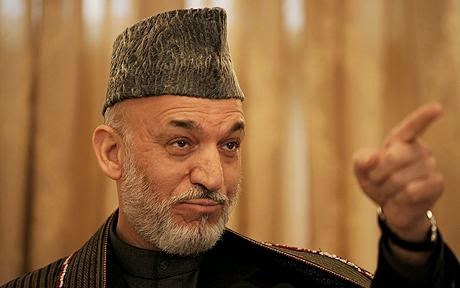 From the latest interview with Afghanistan's President Hamid Karzai in The Telegraph:

Hamid Karzai: 'I saw no good' with America's presence in Afghanistan

Hamid Karzai, the president of Afghanistan, admits that he has not spoken to Barack Obama in seven months as he reveals the complete breakdown of trust between his country and the United States


The president of Afghanistan has not spoken to his American counterpart since June, he said, in an interview which showed the increasing gulf between Kabul and Washington.

Hamid Karzai, 56, has grown increasingly hostile towards Barack Obama as Afghanistan prepares to elect a new president in April. Mr Karzai will not stand again, but he is determined to emphasise his disagreements with the United States before he steps down.

"This whole 12 years was one of constant pleading with America to treat the lives of our civilians as lives of people," he said, adding that he had not spoken to Mr Obama since June.

"We met in South Africa [at Mandela's funeral] but didn't speak. Letters have been exchanged."

Mr Karzai said that he "saw no good" in the American presence in his country....


You know there is more, so go over here to read it.

Email ThisBlogThis!Share to TwitterShare to FacebookShare to Pinterest
Labels: Karzai on America