Conspicuous Gallantry Cross for soldier who fought on with broken back 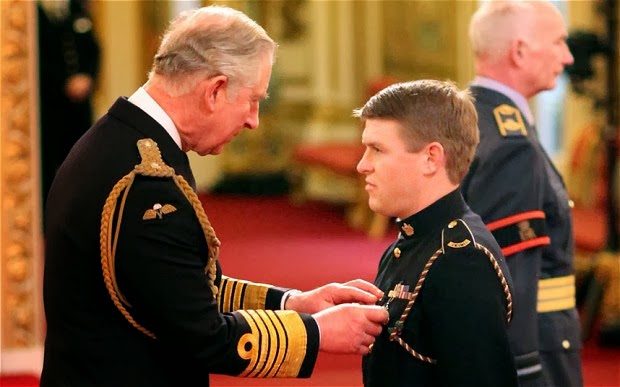 Corporal Josh Griffiths, The Mercian Regiment, is decorated with the Conspicuous Gallantry Cross by the Prince of Wales Photo: PA

A young soldier who fought off a fierce Taliban assault despite having his back broken by a huge car bomb attack has received the country’s second highest gallantry award at Buckingham Palace.
Cpl Josh Griffiths was presented with the Conspicuous Gallantry Cross by the Prince of Wales for “exceptionally brave and selfless actions” which saved the lives of his wounded colleagues.
The 24-year-old of 1st Battalion The Mercian Regiment was sitting down to dinner at his patrol base in Afghanistan’s Nad-e Ali district in March last year when a minivan packed with half a ton of explosive blew a 40 yard hole in the perimeter wall.

The blast demolished the cookhouse where he was sitting and marked the start of an onslaught by insurgent gunmen who tried to storm into the base.

Cpl Griffiths, from Eastham, Wirral, Merseyside, came to amid the chaos of the flattened building, injured and surrounded by the cries of comrades....


GO read the rest of this amazing story here.

While you are over there, check out the link in the right hand sidebar of  Navy photographer awards.
Thank you ALL for your Service.
Posted by The Brat at 1:23 AM