Kerry proves - again - how inept an 'expert' he is,  as he tries to tell Israel what they need to do to ensure peace in the region.

First up,  via The Daily Caller, Kerry tries to establish his *ahem* credentials:

Kerry to Israeli critics: I’ve been ‘attacked before by people using real bullets’

John Kerry invoked his Vietnam War service to push back against an Israeli cabinet member who criticized his recent comments on the Israeli-Palestinian peace process.

During a security conference in Munich last weekend, Kerry suggested that if his Israeli-Palestinian peace effort fails, there could be serious consequences for Israel.

“For Israel there is an increasing delegitimizing campaign that has been building up,” Kerry said, without condemning the effort. “People are very sensitive to it. There are talks of boycotts and other kinds of things.”

In response, Israel’s economy minister Naftali Bennett harshly criticized Kerry’s failure to speak out against the delegitimization campaign at the conference.

“We expect our friends around the world to stand beside us, against anti-Semitic boycott efforts targeting Israel, and not for them to be their trumpet,” he said in a statement....

Kerry tries to walk it back, as yet again, US spokespeople discover that words have power, especially when uttered by a US foreign policy official.   From Israel National News:

Sometimes, even the US eats its words.

State Department Spokeswoman Jen Psaki took to Twitter Sunday to defend the remarks of US Secretary of State John Kerry, who threatened Israel with boycotts if peace talks fail.

"Today’s status quo absolutely, to a certainty, I promise you 100 percent, cannot be maintained. It’s not sustainable. It’s illusionary," Kerry stated on Saturday night at the Munich Security Conference. "You see for Israel there’s an increasing de-legitimization campaign that has been building up [. . .] there are talk of boycotts and other kinds of things. Are we all going to be better with all of that?"
Kerry's comments were widely perceived as threats by not only the media, but the Israeli government. Both Deputy Defense Minister Danny Danon and Prime Minister Binyamin Netanyahu sharply criticized Kerry's comments.

"Attempts to impose a boycott on the State of Israel are immoral and unjust," Netanyahu stated, at the opening of his weekly cabinet meeting. "Moreover, they will not achieve their goal. First, they cause the Palestinians to adhere to their intransigent positions and thus push peace further away. Second, no pressure will cause me to concede the vital interests of the State of Israel, especially the security of Israel's citizens.

"For both of these reasons, threats to boycott the State of Israel will not achieve their goal," Netanyahu concluded....


Read the rest of this example of the Israeli's giving Kerry a dose of reality, here.

Others chime in.. From Israel National News:

Abraham Foxman, Director of the Anti-Defamation League, issues sharp response to US Secretary of State's remarks against Israel.
By Tova Dvorin  2/4/2014 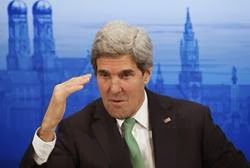 In yet another backlash, the Anti-Defamation League (ADL) issued a letter slamming the boycott threats against Israel from US Secretary of State John Kerry Tuesday.

Kerry's comments at the Munich Security Conference Saturday have sparked an immense backlash from the Israeli government. He said then, "today’s status quo absolutely, to a certainty, I promise you 100 percent, cannot be maintained. It’s not sustainable. It’s illusionary," Kerry stated. "You see for Israel there’s an increasing de-legitimization campaign that has been building up [. . .] there are talk of boycotts and other kinds of things. Are we all going to be better with all of that?"

We are writing to you at this moment with great respect for the exemplary and devoted efforts you are putting in to try to move peace forward between the Israelis and the Palestinians.

We have all witnessed the suffering and loss on all sides as the conflict continues year after year, decade after decade. We welcome your perseverance and optimism in trying to accomplish something that has eluded others time and again.

It is with this perspective in mind that we regretfully read of your comments this past weekend in Munich. In speaking about the price Israel will pay if the peace talks break down and Israel is blamed, you may have thought you were merely describing reality. But as the key player in the process, the impact of your comments was to create a reality of its own....


Oh and those Rabbis?  Read on from INN(can't find the direct link):

A group called Rabbis from the Committee to Save the Land and People of Israel sent a letter to US Secretary of State John Kerry this Sunday, warning him to end his "antagonism" towards Israel.

The rabbis sharply criticized Kerry for his plans to establish an Arab capital in Jerusalem for Palestinian Authority (PA) Chairman Mahmoud Abbas, and to have Israel withdraw to the 1949 Armistice lines. On Saturday, Kerry threatened Israel with an international boycott if peace talks fail, in addition to previous threats of a "Third Intifada" last year.

"Your incessant efforts to expropriate integral parts of our Holy Land and hand them over to Abbas’s terrorist gang, amount to a declaration of war against the Creator and Ruler of the universe. For G-d awarded the entire Land of Israel to our ancestors, Abraham, Isaac and Jacob, in order that they bequeath it, as an everlasting inheritance, to their descendants, the Jewish people, until the end of all time," opens the rabbis' letter.

Warning of the imminent security threat that Kerry's plans would place Israelis in, and bringing the example of Gaza's having turned into a launching pad for rockets, the rabbis slammed the plan for seeking to immediately uproot "20% of the Jews now living productively in Judea, Samaria and the Jordan valley."

The letter adds that Kerry's plan "would force tens of thousands of Jews to be evicted from their homes and livelihoods, devastating their lives financially, economically and psychologically, as happened to those expelled from the flourishing Gaza settlements, most of whom still suffer from the expulsion’s ruinous after-effects."

Drawing on Jewish history, the letters declares to Kerry: "If you continue on this destructive path, you will ensure your everlasting disgrace in Jewish history for bringing calamity upon the Jewish people – like Nebuchadnezer and Titus who destroyed, respectively, the first and second great Temples and the entire Holy City of Jerusalem, and who, by Heavenly punishment, brought eventual disaster upon themselves, too."

"By the power of our Holy Torah, we admonish you to cease immediately all efforts to achieve these disastrous agreements – in order to avoid severe Heavenly punishment for everyone involved," warned the rabbis.

The letter closed with a reference to the upcoming Jewish holiday of Purim, in which the Book of Esther records Haman's genocidal plots against the Jewish people were turned against him and he was "hung on the very same gallows he had prepared for Mordechai, the Jew."

Employing the language of scripture, the rabbis warned “conspire a plan and it will be frustrated; talk the talk and it will not be fulfilled, for G-d is with us" (Isaiah 9:5).


Just another day on the amateur's play box from the White House. This would all be laughable if it wasn't so damn serious.

Email ThisBlogThis!Share to TwitterShare to FacebookShare to Pinterest
Labels: Israel and Kerry