1,042 people were injured after a truck bomb detonated in the garage of the WTC North Tower, killing six. The blast from the 1,500-pound bomb blew a hole five stories deep and half-a-football field wide,badly damaging the tower's inner support beams and causing $500 million in property damage. It took officials 11 hours to completely evacuate roughly 50,000 people from the massive buildings. But the twin towers were repaired, cleaned, and reopened in less than a month.


Since then, each year we honor the memory of Robert Kirkpatrick, 61, Stephen A. Knapp, 47, William Macko, 57, John DiGiovanni, 45, Wilfredo Mercado, 37 and Monica Rodriguez Smith, 35, and her unborn child .

Kirkpatrick, Knapp, Macko and Rodriguez smith were all employees of the Port Authority of New York and New Jersey, owners of the World Trade Center buildings.  They were having lunch when the blast took place. The three men were mechanical supervisors for the agency and Rodriguez Smith was Macko's secretary.  DiGiovanni, a dental supply salesman was visiting the site and Wilfredo Mercado was checking the food deliveries in the basement.

At about 17 minutes past noon, a thunderous explosion rocked lower Manhattan. 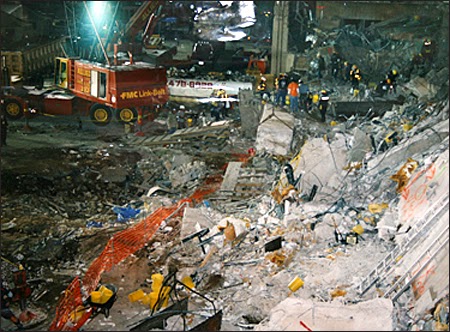 Investigators going through the rubble following the bombing of the World Trade Center.


The epicenter was the parking garage beneath the World Trade Center, where a massive eruption carved out a nearly 100-foot crater several stories deep and several more high. Six people were killed almost instantly. Smoke and flames began filling the wound and streaming upward into the building. Those who weren’t trapped were soon pouring out of the building—many panic-stricken and covered in soot. More than a thousand people were hurt in some way, some badly, with crushed limbs.

It was Friday, February 26, 1993, and Middle Eastern terrorism had arrived on American soil—with a bang.

They’d have it soon enough. The massive investigation that followed—led by the task force, with some 700 FBI agents worldwide ultimately joining in—quickly uncovered a key bit of evidence. In the rubble investigators uncovered a vehicle identification number on a piece of wreckage that seemed suspiciously obliterated. A search of our crime records returned a match: the number belonged to a rented van reported stolen the day before the attack. An Islamic fundamentalist named Mohammad Salameh had rented the vehicle, we learned, and on March 4, an FBI SWAT team arrested him as he tried in vain to get his $400 deposit back. 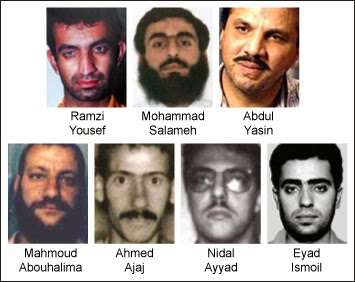 
In May 1994, four men - Mohammed Salameh, Nidal Ayyad, Mahmud Abouhalima and Ahmad Ajaj - were sentenced to life for bombing the World Trade Center, which killed six people and injured 100.


In October 1995 Sheikh Omar Abdel Rahman, a blind cleric who preached at mosques in Brooklyn and Jersey City, was sentenced to life for masterminding the bombing,.


He was also found guilty of the murder of extremist Rabbi Meir Kahane and a scheme to assassinate Egyptian president Hosni Mubarak during a trip to New York in 1993.


Go here for more - plus video.

Email ThisBlogThis!Share to TwitterShare to FacebookShare to Pinterest
Labels: WTC 1993