On Thursday, October 12, 2000, while refueling at a port in Aden, Yemen, the U.S. Navy destroyer Cole was attacked by a two suicide bombers navigating a small motorboat full of explosives. The explosion occurred at 11:18 a.m. Bahrain time, killing 17 crew members and wounding 39 others....

The ship, which was carrying a crew of 293, was en route to the Persian Gulf to help enforce an oil embargo against Iraq.  (source)


Those charged with the attack have been held in GITMO, and are currently facing hearings in a Military Tribunal:

A charge is merely an accusation; an accused is presumed innocent until and unless proven guilty.


Thirteen years after the USS Cole attack, the families of those murdered still wait for justice.

This last Monday, the current round of Tribunal Hearings in this case - which was scheduled to last eight days - was abruptly halted. From Military.com:

GUANTANAMO BAY NAVY BASE, Cuba -- An Army judge abruptly recessed the first military commission session of the year Monday because the alleged architect of al-Qaida's 2000 USS Cole bombing may want to fire his lawyer.

But Nashiri's death-penalty defender, Rick Kammen, a civilian, told the judge moments into the hearing that the prisoner had lost confidence in him, and wanted to fire him. He asked for two days to work with the accused on preserving the relationship. Pohl agreed.

He recessed until Wednesday and said, if the hearings go forward, he'll hold Saturday and Sunday sessions to make up time.

Nashiri, who could be executed if convicted as the mastermind of the suicide bombing of the $1 billion warship off Yemen in October 2000, sat silently in the courtroom for the 10-minute hearing.
Seventeen sailors were killed in the attack, and the fathers of three said later that the recess was proof that the United States was bending over backwards to give the accused terrorist a fair trial.

"I'll be here no matter what. We owe this to our son to make sure this happens," said John Clodfelter, 65, whose sailor son Kenneth, 21, was killed in the blast. He's made the pilgrimage to this remote base in southeast Cuba for each hearing, and declared himself "past disappointed a long time ago."

Jesse Nieto, 70, whose son Marc, 24, was also killed, echoed long-held sentiment that the accused was engaged in stalling tactics. "Anything he can do to gum up the work's he's going to do it," he said.

No report out of GITMO yet as to the outcome today, but you can read the rest of the above account here.

As with the ongoing Military Tribunal relating to the 9/11 terrorist attack, the wheels of justice are grinding exceedingly slowly.  For some sense of why, you might want to check out the 'unofficial/unauthorised transcript' of the USS Cole proceedings posted on the Military Commission's own website.

Mr Nieto, quoted above in the military.com story is not alone in his perception that the accused "was engaged in stalling tactics. "Anything he can do to gum up the work's he's going to do it," ...

I would be hard-pressed to argue their observations. However, even as we all watch the ongoing tactics of the accused, I continue to hold to the belief that for the USS Cole and 9/11 survivors, there WILL be ultimate justice. 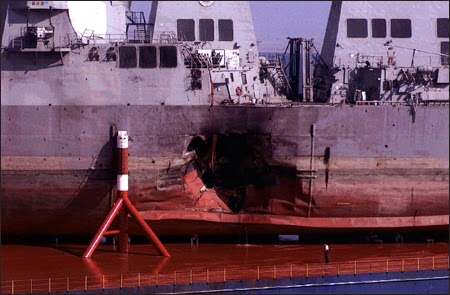 (From the FBI site)