Things that make you say : "Whuuuut?" Caught this one from the South China Morning Post:


Though not the only candidate with a chequered past, Sayyaf emerges a strong contender for April vote owing to stance on women's rights, religion and diplomacy 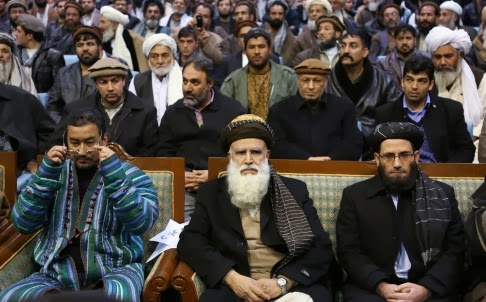 He has been called a mentor to accused 9/11 mastermind Khalid Sheikh Mohammed and the man who welcomed Osama bin Laden to Afghanistan in the 1990s. He was accused of war crimes and atrocities, and even has a terror group named after him in the Philippines.

But these days, Abdul Rab Rasoul Sayyaf has refashioned himself as an influential lawmaker, elder statesman and religious scholar – and possibly the next president of Afghanistan.

While Sayyaf is not the only former warlord among the 11 candidates in the April 5 election to succeed President Hamid Karzai, he appears to have sparked the greatest worry among Westerners because he is seen as having a viable chance at winning.

Other front runners include Abdullah Abdullah, who was the runner-up to Karzai in the disputed 2009 elections; Qayyum Karzai, a businessman and the president’s older brother; and Ashraf Ghani, a former finance minister and academic.

“Afghanistan still depends on the goodwill of foreign donors for nearly all of its government’s budget,” said Graeme Smith, senior Afghanistan analyst with the Brussels-based International Crisis Group. “A Sayyaf win would probably really test those relationships because foreign donors might not be thrilled by some of his positions.”...


This recycling of murderers as politicians is not new, not unique to Afghanistan, but should give all of us pause for thought.  Go read more about this latest 'candidate ' here.

Yet another reminder that what happens 'over there' really DOES impact us all.