Royal Marines are playing a key role in the cross-government and multi-agency relief efforts, supporting those affected by the flooding.

Yesterday, 6 February, around 40 Royal Marines from 40 Commando, based in Taunton, moved to the village of Athelney to provide general flooding assistance.

The activities carried out by the Royal Marines overnight included delivering, filling and placing over 400 sandbags on the Somerset Levels in an attempt to improve flood defences. This morning, they have moved to Moorland, where they are using 2 Pinzgauer vehicles to help evacuate 140 properties.

The military are on high readiness, poised to receive further tasks as required. They remain engaged with the local community and in addition to the Royal Marines on the ground in Moorland, a number of military planners are working with the relevant agencies at a range of locations to scope what further support the military can offer. 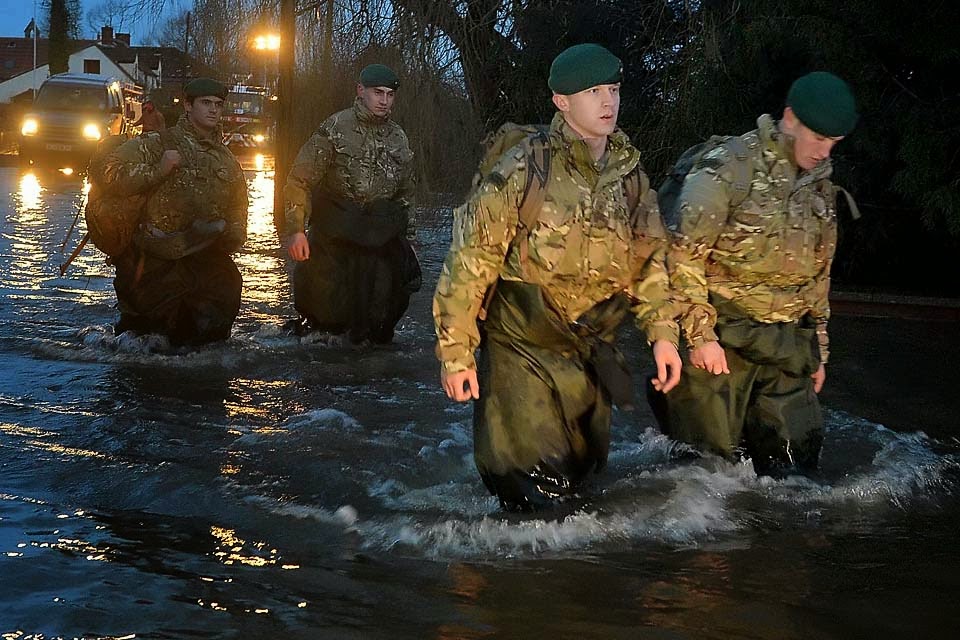 As a result, floodwater has covered over 65 square kilometres on the Somerset Levels, with hundreds of people having been affected. Around 200 people have been cut off in the villages of Muchelney, Thorney, Oathe, Stathe and North Moor.
Lieutenant Brendan Ford said:

We are happy to be here and happy to be helping. A number of us are from the Somerset region and we are pleased to assist a community which has always been so supportive of us."


Much more, and pictures too! Here.

Sailors, soldiers and Royal Marines have been drafted in to help with the ongoing flooding crisis.
As 60 square miles of the Somerset Levels remain underwater, there are now 14 severe flood warnings in place along the River Thames.

Yesterday (Sunday) sailors and soldiers were in Datchet in Berkshire helping householders prepare for the worst.

One hundred sailors from HMS Sultan in Gosport were drafted in to build emergency defences to channel away any water should the worst happen.


More, plus a video report, here.

On the Beeb, there are more reports, more pictures and 'dramatic' videos.  Check that out here.

Over at the Daily Mail, some incredible pictures of England under water..

Lapping at the Queen's doorstep: As floods hit Windsor, nearby villagers flee homes swamped by the swollen Thames

The Thurner family set sail from the front steps of their Victorian home in glorious midday sunshine, stepping into a small kayak that had been rowed up the high street of the normally idyllic commuter village of Datchet.

Daughters Beatrix, Scarlet and Marina were lifted carefully into the precariously-bobbing vessel, before a bowl of Pedigree Chum was placed inside the hull to convince Ruby, a young boxer dog, to join them.

Last of all came mum Sian and dad Robert, carrying suitcases which contain the provisions which must sustain them until the murky flood waters covering half of Berkshire subside. 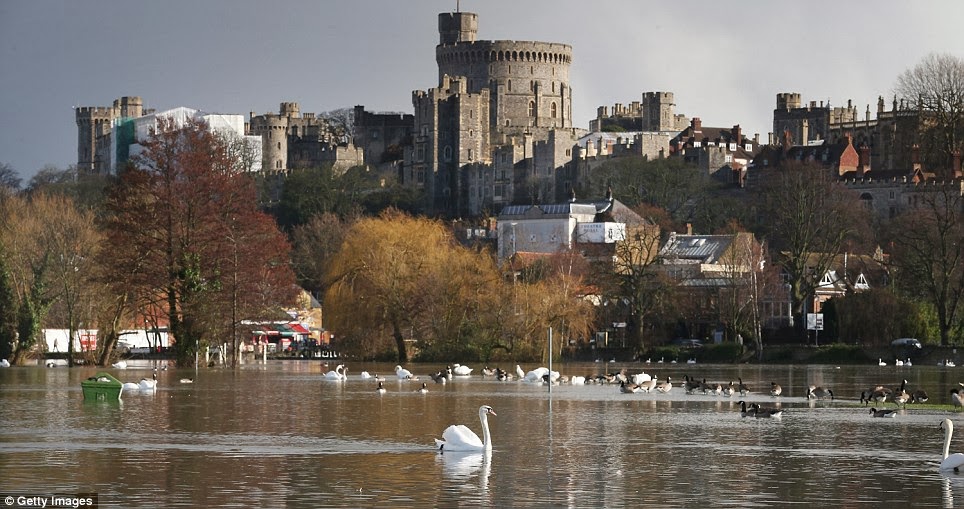 Royal washout: Swans and geese take advantage of the new lake that formed below Windsor Castle

Many more amazing pictures of England under water here.


Is it bad of me that I am singing: "Rule Britannia. Britannia rules the waves..."???

Email ThisBlogThis!Share to TwitterShare to FacebookShare to Pinterest
Labels: Britain under flood