Building 42003 was the site of the Hasan terrorist attack - no, NOT 'workplace violence' as some people insist on calling it. 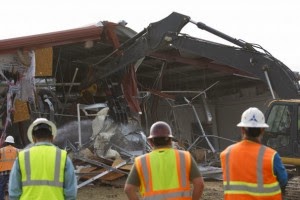 “For the building in which this horrific event took place just to be wiped off the map before we have a say in what’s done with it seems like another slap in the face.” Platoni is right: this is just another manifestation of the all-pervasive denial of the reality of jihad. They are pretending this jihad attack did not happen. Instead of acknowledging the murders realistically and redoubling our determination to resist jihad, U.S. officials have consistently dissembled and pretended that Nidal Hasan had motives other than the ones he repeatedly stated. And one thing is certain: whatever memorial is constructed there will say nothing whatsoever about why Hasan murdered these people — as if a Pearl Harbor memorial said, “Random airplane pilots spontaneously and for no discernible reason decided to attack Pearl Harbor on December 7, 1941.”

“Fort Hood tears down site of 2009 massacre,” by Nomaan Merchant for the Associated Press, February 18

DALLAS (AP) — A Texas Army post has razed the building where a former psychiatrist carried out one of the worst mass shootings in U.S. history, with plans to put up trees and a memorial in its place.
Fort Hood officials said Tuesday that they have torn down Building 42003, the site of a 2009 massacre that left 13 people dead and more than 30 wounded.

The building was part of a processing center complex for soldiers deploying and returning from combat. On Nov. 5, 2009, then-Maj. Nidal Hasan carried two weapons inside, shouted “Allahu Akbar!” — “God is great” in Arabic — and opened fire on soldiers waiting for vaccines and paperwork.