Fusilier Lee Rigby, 25, was run over and then butchered in front of horrified onlookers in Woolwich, south east London on 22 May last year. This was all filmed and the two murderers, having gone through a trial to establish their guilt,  are due to be sentenced later this month.  From Jihad Watch comes a reminder of how these practitioners of the religion of pieces really feel about all of us infidels.

Jihadist who murdered soldier on London street tries to gouge doctor’s eye out with a pen
Robert Spencer Feb 3, 2014 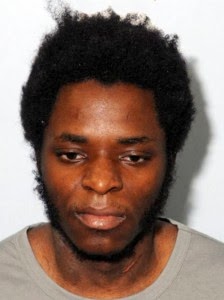 This jihadist’s name is not Michael Adebowale. It is Ismail ibn Abdullah. That is the name he uses since he converted to Islam. Why does the mainstream media persist in calling him by his slave name? The mainstream media would find it racist and disrespectful to call Muhammad Ali “Cassius Clay,” right? Why isn’t it racist and disrespectful to continue to call Ismail ibn Abdullah “Michael Adebowale”? Is it because Muhammad Ali is a revered, beloved figure, while Ismail ibn Abdullah reflects poorly upon his adopted religion, having murdered in its “defense”?

This story also says that Ismail ibn Abdullah “flipped during a hospital visit.” He “flipped”? The man is a jihad killer. He saw his chance to wound, perhaps mortally, another Infidel in the service of the Satanic British government, thereby pleasing Allah even more than he already has. And look: the Qur’an says “when you meet the unbelievers, strike at their necks” (47:4). But Ismail ibn Abdullah instead struck only at this unbeliever’s eye: clearly he is a moderate.

“Lee Rigby killer tried to gouge doctor’s eye out with a pen,” by Dominik Lemanski for the Daily Star, February 2 (thanks to Pamela Geller):

WOOLWICH killer Michael Adebowale tried to gouge out a doctor’s eye with his own pen.
The 22-year-old, who butchered Fusilier Lee Rigby, flipped during a hospital visit.

He lunged at a consultant at the Royal London Hospital after being asked to sign a patient consent form.

The doctor handed him his own silver pen despite being warned Adebowale…could use it as a weapon.

The killer had been taken to be treated for an infection to his leg.

The male doctor’s eyesight was only saved by the prompt action of prison officers....

STOP the insanity.
Posted by The Brat at 2:09 AM