Mainstream media, on both sides of the pond,  is reporting that GITMO graduate  has been arrested in Birmingham.


From The Telegraph (London): 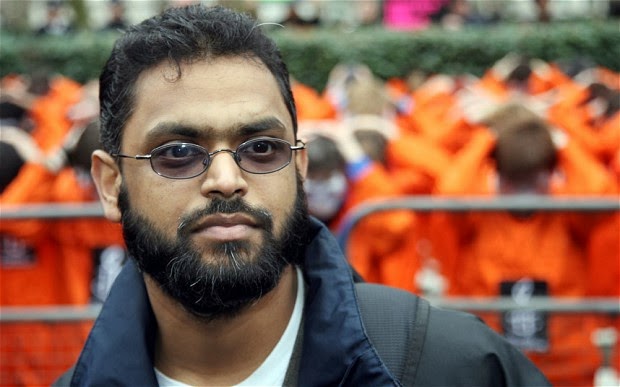 A former Guantanamo detainee who won a huge compensation payout from the British taxpayer after suing the government has been arrested on suspicion of Syria-related terrorism offences.

Moazzam Begg was one of four people arrested by counter-terrorism officers in Birmingham on Tuesday morning.

Begg was being questioned on suspicion of attending a terrorist training camp and facilitating terrorism overseas.

The 45-year-old Briton was originally held on suspicion of being an “enemy combatant” and a “confirmed member” of al-Qaeda after a raid in Pakistan by FBI agents and local police.

He was transferred to Bagram detention centre in Afghanistan then to Guantanamo Bay, but was released without charge in January 2005 after the British government intervened....


There is more on this one here.

I had forgotten about him, and how the msm had painted him as misunderstood blah blah....until I heard an interview on radio last night with one of Begg's long-time friends in England, commenting on Beggs' arrest.

"He is a very calm, very articulate sort of person so to suggest he would go off and raise a kalishnakov (sp?) is out of character..."...He is an advocate...


The whole interview is here.

It is well known that a huge percentage of the GITMO grads return to their old ways.  It is also well documented (here and other places) that Syria is a magnet for foreigners who want the terrorist training offered there, so they can return to their own countries and raise hell. This is not news.

As part of the Beggs focus on CBC last night, they rebroadcast a clip of an interview they did with him after his release from GITMO.  Interesting on a number of levels, not least of which was his telling his knowledge of Omar Khadr.  Khadr and Beggs seem to be cut from the same cloth: both misunderstood.

As noted above, Beggs raked in the money, after successfully suing the British government.  Khadr obviously paid attention, since he is currently suing the Canadian government for $60m. (Yes, million.)

As POTUS MIC continues trying to close GITMO, and releases all those misunderstood residents, we will be seeing more of these stories.