Everybody remembers the MIC asserting that we have the terrorists 'on their heels, and on the run, ' right?  As John Kerry continues his global tour to talk about gorebull warming (because this IS the biggest threat on the planet today,) a recent study gives FACTS that the Global War On Terror is alive and well, no matter the claims of the current US administration.


Increase in global terrorism and insurgency in last five years 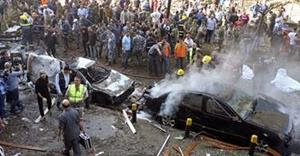 A new study from IHS Jane reports that the number of attacks by non-state armed groups around the world has rapidly increased in just five years. In 2009, 7,217 terrorist and insurgent attacks were recorded by open sources. In 2013, that number increased by more than 150 percent, to 18,524. [emphasis mine] The study’s author says that the epicenter of 2013 activity was in the Middle East, with significant pockets of violence radiating out to neighboring regions in Africa and South Asia.

The top 3 most active non-state armed groups in 2013 were Barisan Revolusi Nasional (Thailand), the Taliban, and Islami Chhatra Shibir (Bangladesh)

The number of attacks by non-state armed groups around the world has rapidly increased in just five years, according to the IHS Jane’s 2013 Global Terrorism & Insurgency Attack Index.
“In 2009, a worldwide total of 7,217 attacks were recorded from open sources.

In 2013, that number increased by more than 150 percent to 18,524,” said Matthew Henman, manager of IHS Jane’s Terrorism and Insurgency Center (JTIC), which carried out the study.
IHS says that key highlights from the Index include:

This report only goes to 2013, but as anybody who has been paying attention knows, terrorist slaughters around the world continue unabated. The politicians ignore this, and the msm aids and abets the ongoing ignorance.

Read the rest of this chilling report here.