The kids also serve. From the MoD: 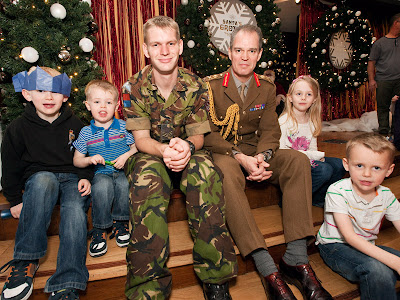 Sergeant Ryan Lewis and his children with Major General Norton CBE at the My Daddy is a Soldier Adventures Christmas Party [Picture: Harland Quarrington, Crown Copyright/MOD 2011]

Christmas arrived early this year for nearly 200 children who have parents serving overseas in the Armed Forces when they received gifts from Father Christmas at a party in the Victory Services Club in London.

The event was organised by fledging charity, My Daddy is a Soldier Adventures, whose founders Louise Fetigan and Linda Trickett are both military wives and mothers and have experienced their partners being away over the festive period.

The Christmas Party is the first event the charity has organised since it was formed in June 2011.

Major-General George Norton, General Officer Commanding London District and representing both the Chief of the Defence Staff and the Chief of the General Staff, attended the party to give his support to those who had loved ones on operations.

"Christmas is a particularly difficult time for Service families who have loved ones overseas, so we are hugely grateful to the Army wives who have set up this charity and made today's party for the children possible.

"It is wonderful to see military families caring for one another in this way, and to experience again the generosity and support of the general public towards the Service community.

"Public support is hugely appreciated throughout the year, but particularly so during the run-up to Christmas, when the children will be more conscious than ever of the separation from their fathers or mothers."...

Go read more here, and remember the children of our Troops.

Email ThisBlogThis!Share to TwitterShare to FacebookShare to Pinterest
Labels: Kids of deployed troops get Christmas