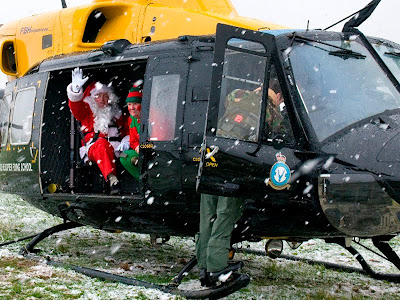 A Squirrel helicopter from the 60 (Reserve) Squadron RAF sets Father Christmas and his helper Elf down in a snowy Shropshire field [Picture: Crown Copyright/MOD 2011]

Father Christmas has been provided with alternative transport to schools and hospitals around Shropshire and its neighbouring counties thanks to the Defence Helicopter Flying School (DHFS) at RAF Shawbury.

Helicopters of the Defence Helicopter Flying School (DHFS) have assisted local schools by providing 'Santa Drops' with their helicopters. The crews transported 'Santa' to various schools and hospitals in the run up to Christmas.

Each of the flights provided vital training for the crews, who were able to fly their helicopters into and land in areas they would not normally be able to utilise.

In the run up to RAF Shawbury closing down for Christmas, helicopters have carried Father Christmas to St Mary's Primary School in Shawbury, and Shawbury Village, as well as to Meole Brace, Oakmeadow, Longlands, Rosymeadre, Alexandra, St John the Baptist, Oxon, Newtown, Holmer Lake, and Myddle Primary Schools, and Hazels' Farm Nursery.

A crew from the Central Flying School (Helicopter) provided a Santa Drop into Hope House Hospice. The Squadron has excellent links with the Hospice and raises money for it each year.

In addition to visiting local schools, a crew from 60 (Reserve) Squadron of the DHFS assisted the RAF Careers Office in Liverpool by flying Santa to the Royal Manchester Children's Hospital on Friday 16 December 2011.

"Our aim is to raise morale amongst the children in hospital over Christmas by delivering Christmas presents in a way only the RAF can....