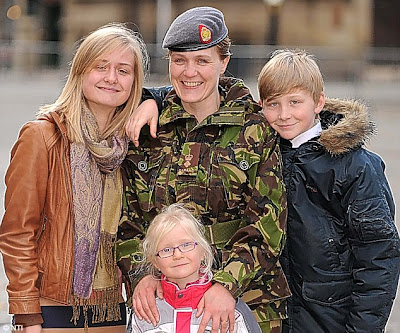 Soldiering on: Sharon Stewart with her children Lucy, 16, Angus, 12, and Connie, five

Like so many women, Sharon Stewart knows all about the challenges of being a working mother. As a mum-of-three, she juggles sleepovers, swimming galas and school runs with her demanding job as matron at a private hospital.

But there are few mothers who find themselves unable to do the school pick-up because they are thousands of miles from home dealing with the devastating human toll of war.

And fewer still who win medals for their inspirational work in the service of their country. For as well as her civilian nursing career, Sharon, 43, has served as a medic in the Territorial Army for the last 20 years.

And it’s for outstanding endeavours at the British Army’s Camp Bastion hospital in Afghanistan that she has just been recognised with one of nursing’s top honours — the Royal Red Cross Medal (Associate). It was first awarded in 1883 when it was given to the most famous nurse of them all, Florence Nightingale. The medal is for ‘exceptional services’ to military nursing and is given to nurses who display extreme courage and devotion in their duties.
‘I feel very proud to be receiving it,’ says Sharon, who became a Lieutenant Colonel in the TA earlier this year. ‘But I don’t think I did anything special, and when I read what my commanding officer said about me I don’t recognise myself.’...

Another of the 'just doing my job' Warriors! Go here and read more.
Thank you for your service, ma'am!
Posted by The Brat at 3:25 AM

And I thought I had a hard time getting up this morning...