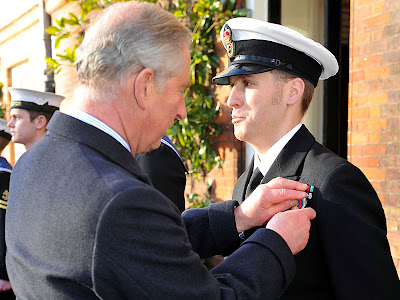 Tourists and well-wishers lined the Mall and the gates of Buckingham Palace to cheer the 'Junglies', as members of the CHF are known, along their way. On arrival at Clarence House, the servicemen women were each presented with Afghanistan Operational Service Medals by His Royal Highness The Prince of Wales.

"Today has been a fantastic occasion. Marching down the Mall in front of cheering and appreciative crowds was a wonderful feeling, and to be then presented with my Operational medal by Prince Charles in the garden of Clarence House, with my partner looking on, was an extremely proud moment; something I will remember forever.

"Prince Charles was really interested in my experiences in [Afghanistan], and I told him that, as part of a CHF unit, I lead a small four-man team that is part of a ground troop which selects helicopter landing sites and coordinates the extraction of ground troops by helicopter."

Chief Petty Officer Colin Harvey, an aircraft engineer on 845 Naval Air Squadron, was also asked about his experience in Afghanistan:

"Being in charge of a large number of sailors is quite a responsibility. But we all feel a great sense of pride and achievement knowing that our efforts were keeping the aircraft serviceable 24-7," he said....

More of this GREAT story, and pictures, here.

Thank you for your service, Junglies!

Email ThisBlogThis!Share to TwitterShare to FacebookShare to Pinterest
Labels: Junglies get Afghan medals