From the Royal Canadian Air Force: 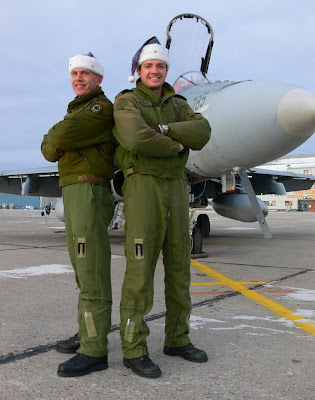 With Christmas rapidly approaching, the Canadian NORAD Region has finalized plans to track and escort Santa Claus during his visits to Canada with the selection of four CF-18 fighter pilots who will act as Santa's official escorts.

First to welcome Santa will be pilots Captains Gregory Myers and Aaron Dhillon of 425 Tactical Fighter Squadron who will launch from 3 Wing Bagotville, Que., as the sleigh approaches Canadian airspace. Taking over escort duties as Santa makes his way into western Canada will be the commanding officer of 410 Tactical Fighter Squadron, Lieutenant-Colonel Christopher Hamilton; his wingman for this mission will be Captain Corey Mask of 4 Wing Cold Lake, Alta.

The Canadian Air Defence Sector Operations Centre at 22 Wing in North Bay, Ont., will alert NORAD when their radar and satellite systems detect Santa approaching North America. The two CF-18 Hornet fighter jets from 3 Wing will welcome Santa off the coast of Newfoundland and Labrador, then hand over their duties as he nears western Canada to the two CF-18 Hornets from 4 Wing who will escort him for the remainder of his Christmas voyage.

Special NORAD 'SantaCams', positioned around the world, will take photos and video of Santa and his sleigh as he journeys around the world. The 'SantaCams' instantly download the photo and video imagery so that it may be viewed by children worldwide on the NORAD Tracks Santa website on Dec. 24.

Starting at midnight MST on Dec. 24, website visitors can watch Santa as he makes all the preparations for his flight. Then, at 4 a.m. MST (6 a.m. EST), trackers worldwide can talk to a live phone operator to inquire about Santa's whereabouts by dialling the toll-free number 1-877-Hi-NORAD (1-877-446-6723) or by sending an email. NORAD's "Santa Cams" will also stream videos as Santa makes his way over various locations worldwide. Last year on Christmas Eve alone, NORAD "Santa Trackers" answered thousands of telephone calls and emails over a 25-hour period.

NORAD is a bi-national United States and Canadian organization, charged with the missions of aerospace warning and aerospace control for North America. NORAD performs its mission 365 days per year, but on Christmas Eve, NORAD performs an additional mission - tracking Santa around the world.

Merry Christmas and a Happy and prosperous New Year (hope ya win the lottery!)