Families Use Creativity to Connect With Deployed Loved Ones 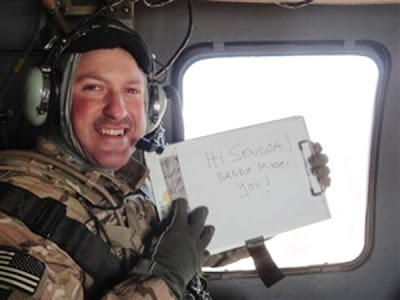 Army Maj. Darren LoRe sends a message to his son, Sendoa, from Afghanistan, where he’s been deployed since May. He’ll connect with his family over the holidays using Skype and instant messaging. Courtesy photo

WASHINGTON, Dec. 23, 2011 – Molly Blake will unveil a special guest on Christmas, someone who is an even bigger hero to her daughters than Santa Claus: their dad.

She’ll use technology to enable her deployed husband, Marine Corps Lt. Col. Peter Blake, to participate in the morning festivities.

“We’ll prop him up on the fireplace on the computer,” she explained.

From his fireplace perch, their dad’s computer persona, which they’ve dubbed “Digital Daddy,” will be able to watch as his daughters, Leah and Helen, open gifts.

The lieutenant colonel’s deployment to the Pacific marks his fifth in the couple’s 10-year marriage. His wife, like many military family members, is accustomed to relying on creativity, and a heavy dose of technology, to keep her family connected throughout the holidays.

“He’s been gone for more Christmases than he’s been home,” said Blake, whose family is stationed at Marine Corps Air Station Yuma, Ariz. Her husband is the commander of Marine Attack Squadron 311.

To help speed through this separation, Blake used aluminum foil to fashion a bucket in the shape of a chocolate kiss, which she calls a “kiss jar.” The girls counted out one candy kiss for each day of their dad’s six-month deployment and loaded them into the jar. They’ll eat a kiss each day until he comes home, she explained.

Blake also created a “Daddy Journal” for each of them with their picture on the cover. On a recent night when they went out for sushi, they brought the journals along and wrote about the experience. “When he gets home he can relive some of these things,” she said.

Overall, the girls are staying positive. They understand the importance of their dad’s mission, she said.

Blake said she, too, is focusing on the positive. Her husband left for his deployment shortly after Thanksgiving. But while he won’t be home for Christmas, she said she takes comfort knowing other Marines will.

“It takes the sting away when someone else will be able to be with their family,” she said...