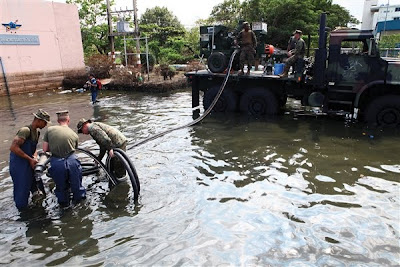 The U.S. service members and Royal Thai soldiers and airmen transported equipment from the Laem Chabang port to fight flooding at the water-inundated airport Nov. 29.

“The Marines were tasked to drain a specific area of the airport that the Royal Thai Air Force had isolated,” said Marine Corps Maj. Jonathan A. Derosier, engineering officer for the 3rd MEF’s flood relief command element. “They had a mission, which was to drain a specific targeted area, and that was within the scope of our capability.”

U.S. forces provided equipment to assist in draining the area, including hose-and-reel systems, 600-gallon-per-minute fuel pumps and vehicles to transport the equipment.

“They wanted to accelerate the natural drainage of the flood water, and to do that we deployed the hose reel to pump the water from the isolated area and routed it through the hose down to a drainage canal,” Derosier said. “That was going to allow the water to naturally flow [from the canal].”

U.S. Marine Corps and Army engineers and civil engineers with the U.S. Air Force’s 36th Contingency Response Group worked with Thai service members, officials said, to determine how to conduct the flood-relief operations, including routing flood water to minimize the length of hose needed, and determining the amount of water to be moved.

“The Marines were able to adapt to the environment and complete their mission,” Dominguez said. “Completing our mission allowed the Thai people to get back to work by gaining access to their buildings.”