Face of Defense: Cousins Serve Together in Afghanistan 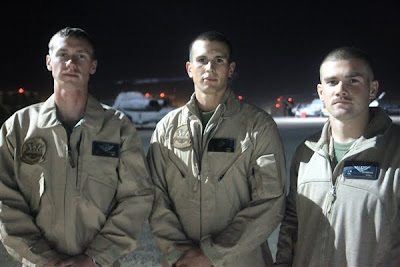 From left to right: Marine Corps Cpls. Lucas Chambers, Steven Kries, and Josey Chambers, who work together as crew chiefs and mechanics with Marine Light Attack Helicopter Squadron 369, pose for a photo on Camp Bastion, Afghanistan, Dec. 3, 2011. The cousins all hail from Scott County, Tenn., and have spent their entire lives and Marine Corps careers together. They’re currently deployed to Afghanistan together for the second time in two years. U.S. Marine Corps photo by Cpl. Brian Adam Jones

Now, as they perform their duties as mechanics and crew chiefs with Marine Light Attack Helicopter Squadron 369 in Afghanistan, they still have one another.

“We grew up really tight,” Josey said. “We have literally been together our entire lives.”

It’s the second time in two years the three cousins have deployed to Afghanistan together.

All three Marines hail from Scott County, Tenn. They completed boot camp together at Parris Island, S.C., trained to be helicopter mechanics, and checked into their first unit together.

“We figured we’d get different units but we lucked out and were assigned to the same squadron,” Steven said.

“Our families get a little comfort knowing we’re out here able to watch each other’s backs,” Lucas said.

Lucas admits Christmas in Afghanistan will “probably just be another day here.” But he acknowledged that he’s always thinking about his family back home.

“That’s probably the worst part of it,” Lucas said, “knowing they’re going to be thinking of us and missing us.”

The cousins have stayed exceptionally close during their time together in the Marine Corps. The three Marines said they like being able to lean on each other in Afghanistan.

“Everyone out here is like family, but having these guys definitely helps,” Josey said.