Welcome Home: Lest We Forget 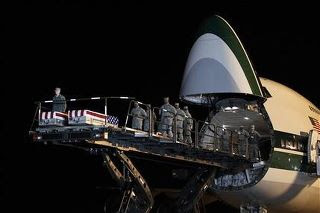 Our Military Police brothers home in the United States. We will be forever grateful. May we never forget their sacrifice.

The Department of Defense announced today the deaths of three soldiers who were supporting Operation Enduring Freedom.

They died Dec. 27, in Paktia, Afghanistan, of wounds suffered when enemy forces attacked their unit with an improvised explosive device. They were assigned to the 720th Military Police Battalion, 89th Military Police Brigade, Fort Hood, Texas.

"He which hath no stomach to this fight let him depart. But we in it shall be remembered. We few, we happy few, we band of brothers! For he today, that sheds his blood with me, shall always be my brother.” (W.Shakespeare) Rest in peace my Brothers, you have not been forgotten.


WELCOME HOME: Lest We Forget.
Posted by The Brat at 4:11 AM