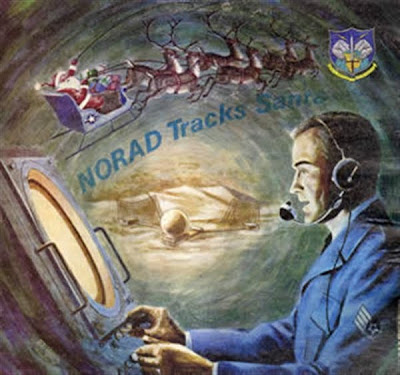 The North American Aerospace Defense Command based at Peterson Air Force Base, Colo., will again track Santa Claus on his annual Christmas Eve flight to deliver presents to children around the globe. Courtesy graphic

WASHINGTON, Dec. 5, 2011 – For the 56th year running, the North American Aerospace Defense Command will add the job of tracking the global flight of Santa on Christmas Eve to its mission of North American aerospace warning and control.

"NORAD stands the watch protecting the skies of North America 365 days a year, but on Christmas Eve the children of the world look to NORAD and our trusted partners to make sure that Santa is able to complete his mission safely," said Army Gen. Charles H. Jacoby Jr. Jacoby commands NORAD, as well as U.S. Northern Command, both based at Peterson Air Force Base in Colorado.

The NORAD Tracks Santa mission “is a duty to the children of the world,” he added, “and a privilege we've enjoyed for 56 consecutive years.”

From a NORAD video of the 2010 Santa flight, a military specialist looks up from a bank of computer screens:

“Sir,” he says, turning to look at the camera, “we’ve picked up ‘Big Red’ on the radar. He’s entering from the northeast.

“Recommend fighter escort as he transitions over North America,” the specialist adds, as the video shows an F-16 moving down the runway.

This year, the NORAD Tracks Santa website went live Dec. 1 and features a Countdown Calendar, a Kid’s Countdown Village with holiday games and activities that change daily, and video messages from students and troops from around the world.