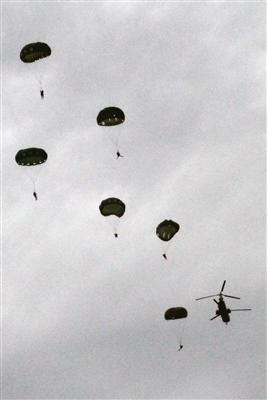 Ryukyu Warrior 2012 is an annual Marine air command and control systems training evolution, which gives squadrons and personnel within 1st MAW, and units from other services, the opportunity to familiarize personnel with equipment, and provide new Marines an opportunity to gain experience.

In static-line parachuting, a static line, or fixed cord, is attached to one end of the aircraft while the other end is attached to the pilot chute inside the jumper’s backpack. This opens a jumper’s parachute automatically upon exiting the aircraft.

On the island of Okinawa, Marine pilots often provide air assets for the Army because the Army does not have an internal aviation element, said Marine Capt. Cory J. Jobst, a ground training officer with the squadron.

“These training exercises with other branches provide mutual benefits for each side,” said Jobst. “My Marine pilots get routine flight training and also the benefit of training with the Army paratroopers.”

“When the Marines are flying you can feel a sense of urgency and importance in the training,” said Devery.

For the safety of the paratroopers, Marine pilots communicate with special forces support personnel on the ground at the drop zone. Communication between the two is key in ensuring a safe jump, said Army Staff Sgt. Nathaniel R. Giese, a special forces medical sergeant with 1st Battalion, 1st Special Forces Group Airborne.

“Safety is our number one priority with the jumps,” said Giese. “Wind, weather and location all play a part in a successful jump.