"...Against all enemies foreign and domestic..." 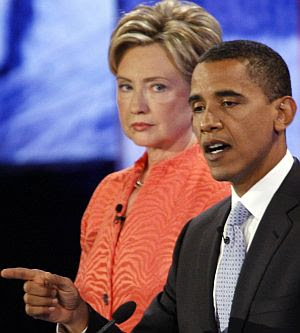 (source - from last year on the campaign trail.
I like this picture for what it really says!)

Chase brought a touch of Hollywood star power to a gathering of Washington's power elite, including Henry Kissinger and three other former secretaries of state, as Vice President Joe Biden administered the oath of office.

Chase told The Associated Press that he and his wife Jayni have been friends with the Clintons since the early 1990s.

Among the other attendees: Senate Majority Leader Harry Reid, House Speaker Nancy Pelosi and retired Army Gen. Wesley Clark. Also, Sen. Carl Levin, with whom Clinton served on the Senate Armed Services Committee during her years as the junior senator from New York, and Sen. John Kerry, who presided over Clinton's confirmation hearing last month as chairman of the Senate Foreign Relations Committee.

And there were the other Clintons _ former President Bill Clinton and daughter Chelsea Clinton, plus the secretary of state's mother, Dorothy Rodham and Clinton family friend and confidante Vernon Jordan.

In her remarks, Clinton thanked Biden and President Barack Obama for choosing her as the nation's top diplomat, saying she had assumed her new responsibilities "at a real hinge-of-history time."

"We have in the leadership of President Obama someone who wants us to reach out to the world, to do so without illusions, understanding that the difficulties we face will not be wished away," she said.

In a slightly awkward moment, Clinton thanked her husband, who stood behind her and beside Chelsea. "I am so grateful to him for a lifetime of," she said _ pausing as if searching for the right words _"all kinds of experiences." At that the crowd erupted briefly in laughter.(onenewsnow.com)

And if you really must, you can go to CBS News and see the video here. Yes, we really DO live in interesting times.

Email ThisBlogThis!Share to TwitterShare to FacebookShare to Pinterest
Labels: Hillary Clinton, swearing in as 67th SOS