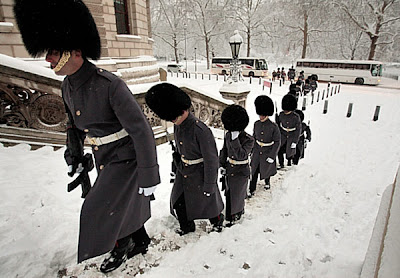 Scots Guardsmen trudge through the snow outside the Foreign Office

(you can see more pictures at the Evening Standard here.)

Thousands of people were left stranded as the heaviest snowfall to hit the UK in 18 years swept across the country, causing travel chaos and closing thousands of schools.

Air, rail and road services were all severely disrupted as Prime Minister Gordon Brown said the authorities were doing "everything in our power" to ensure the resumption of key transport links.

An army of snow ploughs and gritters were working round-the-clock to clear roads as much of the UK was blanketed in snow.

Major airports closed runways and all British Airways flights from Heathrow Airport were cancelled until 5pm, as were all bus services in London and dozens of trains during the morning rush hour.

On the London Underground, 10 of the 11 lines were either completely or partly suspended as the "quantity of snowfall" disrupted services, a Transport for London spokesman said...

Brrrrrrr! I don't remember such snowfalls from my years in London. I am thinking that Gordon Brown may be breathing a sigh of relief as THIS takes over the headlines, rather than the foreign workers being shipped in to take jobs away from the Brits. Bit hot under the collar there, Gordon? But that's another story for another day. Meanwhile, go read the rest of this freakish weather story here.

Update: Checking the BBC for weather stories, I find this gem out of Wales( I have an uncle there, just to give a little-known BratFact) :

Weather forecaster Malcolm Weatherall of the Met Office said that up to 10cm (4in) of snowfall was expected in parts of Wales in the next two days.

"The cold weather will continue right through the night, but we not sure exactly where it will fall."

"Make sure you have plenty of warm clothes and footwear in your car," he said.

Snow was causing hazardous driving conditions on the A48 at Carmarthen. Drivers are being urged to be careful.

There was some disruption on the A55 in the north Wales and also to train services from south Wales to London....(here)

Okay, I did laugh at that one. Why? you ask? Because a weatherman with the name "Weatherall' harkens back to the olden days (even before I was born.lol) when British surnames reflected the trade of a person. See? You learned something new today!! All part of the BratFact service..

Brat,
LOL!! I did learn something new today! Actually several things, thanks to you.
But does England not get snow? Ever? And 4" is a problem? Golly Gee! But what I want to know is, did you tell your uncle "Welcome to my world?" ROFL.

Looks more like Chicago, my Chicago. That is what we have been going through.

Yes KYW, England does get snow, but not to that extent that I remember. And yes, 4" and all of London closed down. THAT made me laugh.

And uhuh Findalis, that is what it looked like here for at least 3 weeks around Christmas. That also made me laugh to look at these pictures..but most of ours is gone now, thank goodness.:)

It's that damned global warming...