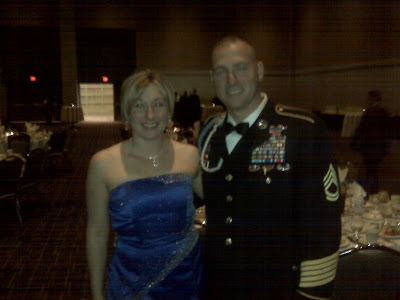 A crowd gathered on a Tuesday eve.

His group was due in and I was pleased.

There were family holding welcome signs.

His friends showed too, to my surprise.

There was quite a crew to see him home.

Even though the holiday found him alone.

And the strain is seeping out of his bones.

The stress and strength are not demanded.

The lines in his face are etched, indented

In his furrowed brow, without his knowing.

The frown shrinks while his smile is growing.

His face is relaxing from the war’s demands.

His adrenalin is not being used just now.

He does not have a load dragging him down;

Lives in the balance, and equipment too.

He does not face the political strife in lieu

Of a grateful nation that will never know

All he and others do in war’s blood-red glow.

The lines are softening, his child inspires love

And his wife feels his pain, seeks his truth.

He is home in body, but there are things,

I take myself back forty years and wonder.

“Can people see the lightening in my brain;

Some missed me with all their hearts yet

Others would not have minded had I stayed.

Some I love only want to continue old fights.

Will some folks grant me a little space

So I can choose my own homeward pace?

Will they crowd in and steal my air, smother me

With love, not letting me open my eyes to see?

Most mean well, others think I was on a lark.

The things I saw came with me, remaining stark.

I cannot tell them; I do not want to hurt them.

I will try to smile, yet deep in me I am still grim.”

Does he feel what I felt and questioned?

I dare not ask, dare not make the suggestion.

He is home…with different things waiting.

I had nobody I hoped more than any other

Would understand, wanting only to be a lover.

But they sometimes put their own demands

Ahead of a soldier’s needs and their words

And deeds can wound deeper than bombs.

What is asked could wait but often will not.

He does not need pushed ahead of thought.

His mind is still reeling, sweltering in desert heat.

He needs time to crawl, get the dust off his feet.

I walked down that street toward home, quickly,

Yet faltering, anticipating yet dreading my own tears.

He may have that same fear coursing in his veins.

It takes time, and compassion, to let war drain.

The welcome home was wonderful, special.

There was pride, the shoulders square, elation.

The love in the room was there in equal portion.

The joy and tears flowed without any shame.

Our progeny, our spouses, our heroes, our hopes

Were home, safely stepping back into today, here.

After the hoopla was pushed out, their minds quiet

The fear, the doubt, the trepidation, again crept out.

He is home but does home want him on his terms

Or only by its own… right back into the demands

Without space, without compassion for his passion?

He does not get some of the sneers that I got.

He does hear the criticism, from some people

And the major media that see him as a threat.

In jaundiced eyes he is not more than criminal.

Or some higher form of warmongering animal.

I will wait for his stories, for his words, for his tears.

Perhaps I am the only one who deters the demands.

I fight myself. I want to rush in and ask that he unload.

I will let him walk before I push him into a broken run.

If we who are closest push the hardest it hurts most.

We must quietly understand his battle with wars’ ghosts.

The old way at the end of World War Two may be best.

Two weeks at sea with warriors was a detoxifying rest.

Now I must, and so must others, make him happy about that.

I have known soldiers who wanted only to go back.

I felt that. Others have too.

Let all who love him give him the space and time

He needs to really come home.

Email ThisBlogThis!Share to TwitterShare to FacebookShare to Pinterest
Labels: He is Home, Mike Mullins

Welcome home to BOTH of you!!!

My family and I are so grateful for the selfless sacrifices you have both made to make this world a safer one for ALL of our children. This mother of two thanks you from the bottom of my heart.

welcome home, both for you and your family. Thank you for your service.

Mike, what a wonderful poem!

Thank you for sharing the poem, there is much wisdom contained in those lines.

Thank you Mike for your service to our country. Thank your son for me also. Job well done!

God has blessed us with fine warriors such as you and your son, so that we may sleep in peace and safety at night in our homes.

That was lovely. It brought tears to my eyes.

Welcome home and thank you.

Brat,
Thank you for bringing this wonderful poem that was filled with compassion and understanding to my eyes.

Sir,
Thank you, and your Son. May he sleep as soundly as we have done.

Thank you for caring and for your support. I look back at my service and I did so little compared to our soldiers today. My service allows me to understand and I hope my writing speaks for some of our vets and increases understanding and appreciation for them. Thanks to Brat for giving me the chance to share here.

I want to add something here. He went to Afghanistan right after 9/11 the first time. He is Airborne, Air Assault, Pathfinder and on his way to Ranger school. She is a Jump Master and she went with him on his second tour in Afghanistan. I am proud of them. Mike