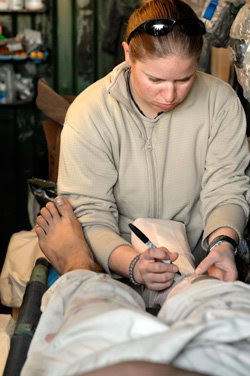 Bala Baluk, Afghanistan - Illinois Army National Guard Spc. Whitney Meyers writes down vital information on the dressing applied to a 16-year-old truck driver of Herat city, during treatment for an injury he sustained to his foot. The Afghan National Police of the area brought Berza to the base where he was stabilized then medically evacuated to the Provincial Reconstruction Team in Farah where he was treated by U.S. surgeons. (ISAF photo)

KABUL, Afghanistan (2/25/09) — When an Afghan civilian is injured in a remote area of Afghanistan, there is little chance of receiving proper medical treatment.

But not when it happens right outside the gate of the joint Forward Operating Base (FOB) in Bala Baluk.

A 16-year-old truck driver from Herat, was working on his semi when it rolled backward over his foot, tearing the skin from his toes to his ankle. The Afghan National Police (ANP) officers, who witnessed the event, reacted quickly and brought Berza into the FOB to see the military medics.

“There was a six-inch laceration on the top of the patient’s foot,” said Meyers. “We wrapped it up to try to control the bleeding and padded it with a splint for protection. Finally, we gave him a pain killer and an antibiotic and got him evacuated to a hospital.”...