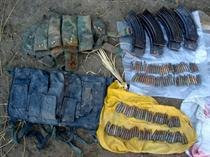 Storming from the back of a RAF Chinook helicopter, Royal Marines from 42 Commando Group have raided a Taliban compound in Kandahar province where they discovered a potentially lethal stash of weapons.

Hidden in one of the compounds they found nearly a dozen AK-47 automatic rifles, rocket-propelled grenades, magazines, ammunition, sacks of home-made explosives, components such as detonator cord used to make Improvised Explosive Devices, and six anti-personnel mines, of the kind which can indiscriminately kill and injure civilians and International Security Assistance Force's personnel alike. ...

How's that for B*N*S*N? Read the rest of this here.