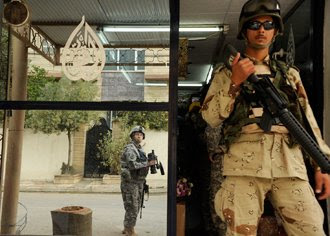 
SATHER AIR BASE — When thinking of the word combat, many have visions of fire fights, violent conflicts and warfare. For a few Airmen and Soldiers, the word combat means being armed with a camera.

For these members of the Multi-National Corps - Iraq C39 Joint Combat Camera (ComCam) team, based out of Baghdad, taking still and motion imagery isn’t just a hobby … it is their mission.

“My job documents history in the making and shows folks at home what’s going on here,” said Staff Sgt. Joann Makinano, MNC-I combat photojournalist. “We are unfiltered and unbiased. What we see is what you get.”

“Our job brings the mission home to people around the world,” added Tech. Sgt. Adrienne Brammer, MNC-I combat videographer and member of the 1st Combat Camera Squadron at Charleston Air Force Base, S.C. “It makes it accessible to people. Plus, a combat camera team gets to go where a lot of people don’t get to go.”

“After seven years with ComCam and this being my third deployment, it’s become second nature,” said Makinano, who is also deployed from the 1st CCS at Charleston AFB. “Most of the units I’ve gone out with think we’re crazy, but we are Airmen and Soldiers first. And being a member of a team means that protecting your battle buddies is a higher priority, regardless of the job.”...

My regular readers know I have always had a soft spot for combat photographers. I wish we saw more of their contribution in the msm ~ but I am happy to highlight their stories here.
Posted by The Brat at 4:44 AM