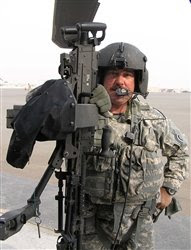 Swift serves as a crew chief and door gunner, jobs he has performed for the past 24 years. He is responsible for ensuring his assigned aircraft is safe by performing routine inspections prior to takeoff.

This is Derry’s second tour in Iraq. He serves as the officer in charge of the battalion’s air movement request section. His job includes viewing flight schedules for battalion soldiers and ensuring they have adequate fuel and time to execute missions.

The soldiers are quick to note the differences between serving in Iraq and Vietnam.

“Vietnam was a lot more active,” Swift said. “We got rocketed more often, and this time it is definitely safer. Where we were once flying in T-shirts, we are now wearing 40 pounds of body armor.”

“It is definitely a lot calmer,” Derry agreed. “There are not as many improvised explosive devices, and our aircraft are not under attack as much.”

Swift pointed out the changes he has seen in the force throughout the years.

“The attitudes have changed in the past years,” Swift said. “At one point, soldiers were forced to deploy through the draft, but now that it is an all-volunteer Army, there is more pride and dedication from the men and women who wear the uniform.”

Although it was a different era, the Vietnam experience instilled values pertinent to today’s American soldier, Swift said.

“I gained respect for fellow humans,” he said. “I also gained pride in my country and in the military.”

This will be the last tour for Swift and Derry, and while they are sad to see their careers come to an end, they said, they are proud to have served their country.

“I am proud that I am still a soldier,” Swift said. “I am glad that they had me back. And while I will be retiring at the end of this tour, it has been a good and rewarding career.”
“I set out to make a career in the military, and that is what I did,” Derry said. “The military allowed me to set up a retirement for my wife and children, and it will be missed.” (source)

Amazing! Thank YOU both for your service!
Posted by The Brat at 8:56 AM